Chinese chaps see these drives and fabric their own way 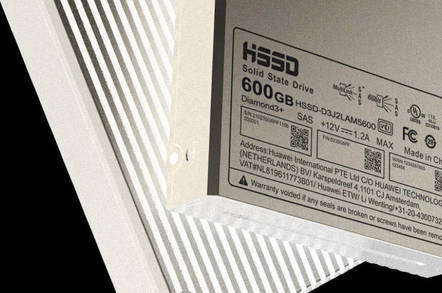 Interview Huawei is a believer in the use of NVMe drives and fabric. Yet it thinks that shared array controller software and hardware will need upgrading to take full advantage of NVMe drives.

It does not believe customers are ready to adopt NVMe over fabric-accessed arrays because of problem areas such as routability for ROCE. We asked them about this in depth.

Huawei Yes, this will most likely be the case if older software stacks are used with existing arrays.

El Reg Must we wait for next-generation controllers with much faster processing?

Huawei The highest performance of an array can be reached after no more than 30 SSDs are configured. To improve the performance, customers can select faster CPUs or scale-out to more controllers.

In addition, Huawei provides in-house critical chips to relieve the CPU pressure, so that the CPUs can provide better performance.

Huawei Yes. And we think dual-port NVMe drives will be affordable in H1 2017.

El Reg What does affordable mean?

Huawei is a pioneer in lowering flash storage costs. Early in Sept. 2015, Huawei had replaced all 600GB 15K HDDs with SSDs on flash storm products.

The online deduplication and compression, and thin provisioning functions configured for arrays, can improve capacity utilisation by several times to provide the optimal unit storage cost.

El Reg Do they need routability with ROCE?

El Reg Could we cache inside the existing array controllers to augment existing RAM buffers and so drive up array performance?

Huawei To maintain reliability, mainstream storage products do not support online memory expansion for storage controllers. Each Huawei storage product provides sub-models with different cache specifications. Customers can choose among the products according to performance requirements.

El Reg With flash DIMMs say? Or XPoint DIMMs in the future?

Huawei This kind of technology is under research, but we don’t know when this will be put into production.

If the media (such as XPoint) becomes mature, we can provide this kind of cache technology in the shortest time.

El Reg Does having an NVMe over fabrics connection to an array which is not using NVMe drives make sense?

Huawei It does make sense. NVMe is a kind of protocol for low latency, and NoF can minimise the latency of host connectivity.

El Reg When will NVMeF arrays filled with NVMe drives and offering enterprise data services be ready? What is necessary for them to be ready?

Huawei NVMe array with NVMe drives and enterprise data services will be ready in 2017. Affordable dual-port NVMe drives are necessary for them to be ready.

As a server, networking and storage supplier of global scale and significance, Huawei’s views on NVMe are of great interest. It is quite cautious. The company’s views on controller hardware augmentation – it “provides in-house critical chips to relieve the CPU pressure” – is different from other suppliers who rely on standard server architectures. A performance comparison will surely prove interesting.

Another differentiating point is its view that an NVMe fabric access to non-NVMe drive-using arrays makes sense because it reduces network latency. Huawei will bring a distinctive approach when it builds an NVMe over fabric-accessed array. ®