I was a robot and this is what I learned

The internet of me 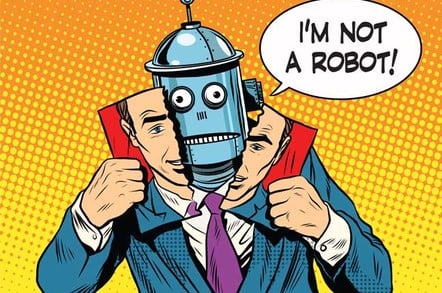 Sysadmin blog For one brief instant, Microsoft was the good guy. Deep within the often customer-hostile behemoth, left after the arrogance and straight on past the victim blaming is the office of Brian First, with the Microsoft Experience Design Group. Alongside a company called Event Presence, Brian made me feel like a real person, actual and whole.

I am not in great shape. My physical deterioration continues apace and in some places may even qualify me as disabled. This isn't an easy thing to admit. Not to myself, and certainly not publicly. The carefully constructed lies we build up to maintain our fragile egos are often far more important to us than the truth.

IT conferences, however, have a way of slapping me in the face with reality. Airports go on forever. They're enormous, sprawling things made out of queues and erratic, frequently hostile flesh-missiles that once were people with hopes and dreams and holiday plans somewhere nice.

Airport security and being trapped in a sardine can that smells like a sewer, with a dozen screaming infants for 12 hours, erases that humanity. And then the real gong show begins.

Careening through some foreign city's streets at breakneck speeds clinging to the back of a taxi wondering just exactly how many laws your cabbie is violating is replaced by more queueing, surly hotel staff, another terror-taxi, and yet more queueing. Once you're clear of the event registration line you've got that fist full of user group meetings, vendor parties and hopefully sleeping all interspersed with either lots of walking, terror-taxis or both.

This is all the day before the conference even starts.

The big conferences are usually four days long. The show floor is giganamous, there are yet more parties, dozens of interviews, seemingly unlimited terror-taxis and I don't even remember what else because the urge to repress everything is overwhelming.

To say that conferences are extremely difficult for me is a sad understatement. Beyond the physical pain, beyond the exhaustion lies humiliation. These events, though critical for my career, leave me feeling broken and inhuman.

To admit this, especially within the confines of the technology industry, is to show weakness. We are supposed to be emotionless automatons, interested only in technology and driven by nothing other than cold pragmatism. How ironic, then, that a remote-controlled robot provided me by a company I so often malign as the evil empire should restore some of my humanity.

The Event Presence guys have told me that I'm not supposed to call it a robot. It's a telepresence unit. "Robot" comes with a bunch of social baggage that a company who makes their living installing and maintaining telepresence units for events reasonably wants to avoid.

When we say robot, we picture an emotionless and sterile automaton. Scary in a way we can't describe. Disconcerting because of science-fiction stories we've read our whole lives.

I've met the cold automatons. They aren't the robots. They live in the comments sections. They snipe at people from the sidelines at pubs, and push people aside at conferences. They sneer derisively when you've fallen and they steal your cab after you've been waiting in the blowing snow for an hour.

At Microsoft Ignite in September I was a robot. I met other robots. They had people in them. Faces on their screens. They were always smiling. They were cheerful, happy, helpful and considerate. I was happy to be a robot. Personally, I think there's nothing bad about the term. It's people that are the problem.

I logged into my telepresence unit and discovered myself in a small booth filled with technicians. A gentleman was there who asked me some questions. Who was I? Did I know how to use the software? Was I logged in to the Skype chat, and did I need any help?

After a brief orientation, I left my charging platform and trundled out into the world. I moved cautiously at first – I needed to get my bearings – but was soon on my way. A few turns and I found the Micron booth. This is a great start; I have friends there.

The Micron folks are great people and all of my nervousness about this new mode of interaction faded away as I talked to them. There was some oohing and aahing about the novelty of the telepresence unit, but after a few seconds the robot, the UI, my computer screen... it all just disappeared. I was there, talking to my friends, and it felt as real to me as being there in person.

I can't say exactly how or why this happens; perhaps it's the control I had over the telepresence unit, but my brain easily accepted the interface and focused instead on the surroundings. It was a remarkable experience.

After chatting with the Micron guys and checking out their ridiculous umpteen-million IOPS per second demo, I went off to see what the other vendors were flogging in their booths. Booth after booth I watched, I saw, I learned. Quietly behind the scenes, Twitter was lighting up with tweets about people meeting and talking to me in robot form. If the novelty quickly faded for me, it sure didn't for those physically present at the event.

In the first few hours I was focused on marveling at my ability to maneuver the event without suffering splintering pain. I mostly moved from booth to booth linearly; there wasn't a lot of long-distance travel across the show floor. Eventually, I met up with Phoummala Schmitt, and everything changed.

It should come as no surprise that someone with the moniker "Exchange Goddess" seems to know everyone at a Microsoft conference. Phoummala was intent on running around the show floor, introducing me to everyone, and the lady can really move when she wants to!

Phoummala is tiny. She's hard to keep track of on the best of days, but in an IT conference that is predominantly men she is significantly shorter than everyone around her, and the Beam telepresence robots aren't tall enough to see over the crowd.

People rarely deliberately stepped in front of Phoummala. If they saw she was headed in a given direction, they'd generally let her pass before continuing on. The opposite was true of me; as a telepresence unit, they expected that I would stop to let them pass. I wasn't human, you see, so it was perfectly OK to throw one's self into my path and expect me to react in time.

This pattern persisted for the hour or so I spent trying to follow Phoummala around. As the evening wore on, the beer came out, and some people would deliberately try to trip the telepresence unit. Others tried to push it over while still more came up behind it and clamped their hands around the camera from behind.

Eventually, Phoummala got frustrated and decided she had to leave to spend time with her fellow humans. By inhabiting a telepresence unit, I simply couldn't keep up with her. The baggage of being a "robot" was still too big a barrier to overcome.

I wished her well and dove back into the crowds. No longer a remotely projected human marveling at my own capability, I had become a scared robot, lost in a sea of hostile flesh monsters without a map back to my charging pad home.

Microsoft gave me the opportunity to experience the best and the worst of telepresence. Event Presence expertly and excellently handled the logistics. Suitable Technologies built the Beam Pro telepresence units. Combined they gave me a glimpse into what's possible.

Brian First has two roles at Microsoft. On the one hand, he is an executive event producer. It is his job to make events ranging from consultations with heads of state to huge conferences like Microsoft Ignite run as smoothly as possible. In his other role, he is an immersive reality architect where he does R&D on augmented and virtual-reality tools, especially as they relate to making events better.

The event presence bots are only the tip of the iceberg for First. Microsoft has so many technologies at its disposal that could make remote attendance of events more real, more immersive, and even an augmented experience over classic physical attendance. We've batted some ideas back and forth, and I sincerely hope to have the opportunity to continue that dialogue.

Microsoft isn't all condescending endpoint antichrists derisively removing control over our operating systems or calculating manipulators relentlessly trying to drive us into the cloud. Not too far under the surface are good people who are trying to restore a little bit of humanity to those who felt they'd lost theirs.