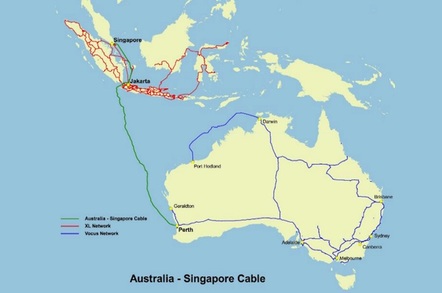 Junior telco Vocus has confirmed it will build a submarine cable linking Singapore and Australia, with a stop in the Indonesian capital Jakarta.

The Australia-Singapore Cable will have capacity up to 40Tbps and will make landfall in Perth.

The cable's been on the drawing board for some time but Vocus today told the Australian Stock Exchange it's signed Alcatel Submarine Networks to do the deed, with construction expected to conclude in August 2018. The announcement (PDF) says Vocus chose today to reveal the news because its acquisition of NexGen networks has now been bedded down, leading Singaporean and Indonesian authorities to approve the cable's landing in those nations.

Vocus says it will write cheques for US$170m to get the job done, initially using cash from the bottom drawer and later by finding new lenders.

The Indonesia arm of the project is important because Vocus has done a deal with local telco XL Axiata Tbk to hook into its 21,000km fibre network across the archipelago. Indonesia's population is at least 220m, growing fast and is buying mobile devices at quite a clip. A link to Singapore, which houses plenty of data centres and is a hub for submarine cables, will therefore be good news for Indonesian consumers and businesses. Vocus already has deals in place to get traffic to the USA, so if its new Asian customers hammer American services it can carry that traffic without copping colossal costs.

Vocus is also hopeful the new cable will be rather faster than other routes when Australians go looking for data from Asian sources.

The cable should be a money-spinner: Vocus forecasts revenue of $550m by the end of 2029, at which point the cable will still have more than a decade of operational life ahead of it.

If the company builds the cable right, upgrades should be possible to increase bandwidth and help to carry the ever-increasing quantities of data humanity consumes. There's no reason to suggest the carrier isn't on a winner with this plan! ®