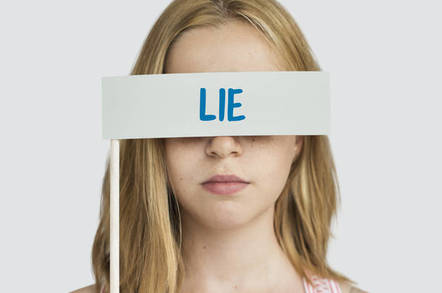 Analysis Blighty's freshly passed Investigatory Powers Act, better known as the Snoopers' Charter, is a dog's dinner of a law. It gives virtually unrestricted powers not only to State spy organisations but also to the police and a host of other government agencies.

The operation of the oversight and accountability mechanisms in the IPA are all kept firmly out of sight – and, so its authors hope, out of mind – of the public. It is up to the State to volunteer the truth to its victims if the State thinks it has abused its secret powers. "Marking your own homework" is a phrase which does not fully capture this.

However, despite the establishment of a parallel system of secret justice, the IPA's tentacles also enshrine parallel construction into law. That is, the practice where prosecutors lie about the origins of evidence to judges and juries – thereby depriving the defendant of a fair trial because he cannot review or question the truth of the evidence against him.

Section 56 of the act as passed sets out a number of matters that are now prohibited from being brought up in court. The exact wording of section 56(1) is as follows:

(1) No evidence may be adduced, question asked, assertion or disclosure made or other thing done in, for the purposes of or in connection with any legal proceedings or Inquiries Act proceedings which (in any manner)—

(a) discloses, in circumstances from which its origin in interception-related conduct may be inferred—

(ii) any secondary data obtained from a communication, or

(b) tends to suggest that any interception-related conduct has or may have occurred or may be going to occur.

This is subject to Schedule 3 (exceptions).

Schedule 3's list of exemptions is broadly confined to national security court hearings, tribunals and other judicial occasions when the great unwashed, usually including the defendant and his legal representatives, are excluded from part or all of the hearing. Out of sight, out of mind.

Parallel construction is a murky doctrine with not very much about it in the public domain because State agents go to great lengths to ensure that it is not brought to public attention.

A 2013 story from Reuters describes how the US National Security Agency, which is constitutionally forbidden from spying on American citizens on American turf (but do so anyway, because they can) effectively launder their illegally collected communications evidence so the Drug Enforcement Administration can use it to catch domestic drug dealers.

Describing how this works in practice, the story said: "A former federal agent in the northeastern United States who received such tips from SOD [Special Operations Division, a unit of the DEA] described the process. 'You'd be told only, "Be at a certain truck stop at a certain time and look for a certain vehicle." And so we'd alert the state police to find an excuse to stop that vehicle, and then have a drug dog search it,' the agent said."

The problem here is not that drug dealers are being caught, but that they are being caught in a way that subverts the legal system and unfairly skews what is supposed to be a level and honest playing field in court.

Section 56(1)(b) creates a legally guaranteed ability – nay, duty – to lie about even the potential for State hacking to take place, and to tell juries a wholly fictitious story about the true origins of hacked material used against defendants in order to secure criminal convictions. This is incredibly dangerous. Even if you know that the story being told in court is false, you and your legal representatives are now banned from being able to question those falsehoods and cast doubt upon the prosecution story.

Potentially, you could be legally bound to go along with lies told in court about your communications – lies told by people whose sole task is to weave a story that will get you sent to prison or fined thousands of pounds.

Moreover, as section 56(4) makes clear, this applies retroactively, ensuring that it is very difficult for criminal offences committed by GCHQ employees and contractors over the years, using powers that were only made legal a fortnight ago, to be brought to light in a meaningful way. It might even be against the law for a solicitor or barrister to mention in court this Reg story by veteran investigative journalist Duncan Campbell about GCHQ's snooping station in Oman (covered by the section 56(1)(b) wording "interception-related conduct has occurred") – or large volumes of material published on Wikileaks.

The existence of section 56(4) makes a mockery of the "general privacy protections" in Part 1 of the IPA, which includes various criminal offences. Part 1 was introduced as a sop to privacy advocates horrified at the full extent of the act's legalisation of intrusive, disruptive and dangerous hacking powers for the State, including powers to force the co-operation of telcos and similar organisations. There is no point in having punishments for lawbreakers if it is illegal to talk about their law-breaking behaviour.

Like the rest of the Snoopers' Charter, section 56 has become law. Apart from Reg readers and a handful of Twitter slacktivists, nobody cares. The general public neither knows nor cares what abuses and perversions of the law take place in its name. Theresa May and the British government have utterly defeated advocates of privacy and security, completely ignoring those who correctly identify the zero-sum game between freedom and security in favour of those who feel the need to destroy liberty in order to "save" it.

The UK is now a measurably less free country in terms of technological security, permitted speech and ability to resist abuses of power and position by agents of the State, be those shadowy spys, police inspectors and above (ie, shift leaders in your local cop shop) and even food hygiene inspectors – no, really.

Explosive news that, for once, doesn't involve a self-detonating battery

Samsung heir does not pass Go, does not collect $200

Disgraced smut-slinging catch one in the eye from Uncle Sam