'Reaper' and 'Predator' were too aggressive ... apparently 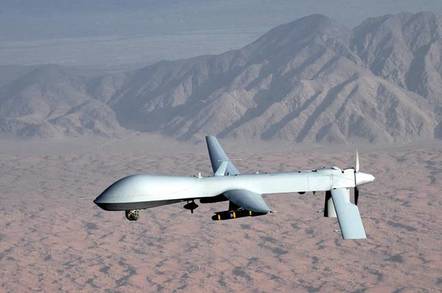 A US MQ-1 Predator drone

The UK Ministry of Defence has tried to rebrand its latest batch of airborne death machines as “Protector” drones rather than their actual trade name of Reaper.

The so-called Protector drones are actually based on the latest model of the General Atomics MQ-9 Reaper drone – known in its latest variant as the Predator – which has a bit of a dubious public reputation after becoming firmly linked in the public mind with US-led death and destruction in the Middle East.

The RAF is splurging £100m to buy 20 of the robot killing devices. The actual sale price was not officially confirmed until this week, though the British government declared its intent to purchase them last year and has periodically repeated this whenever it looked like people were losing interest in the armed forces.

The RAF’s existing MQ-9 Reapers are operated by 39 Squadron, nominally based at RAF Waddington but with a standing detachment at US Air Force Base Creech in Nevada. The Reapers were bought as an urgent operational requirement (UOR) for Afghanistan, meaning they were funded by the Treasury rather than from the core defence budget.

A fresh procurement of modernised Reapers means they are part of the core defence budget and can expect to see several years in RAF service. ®