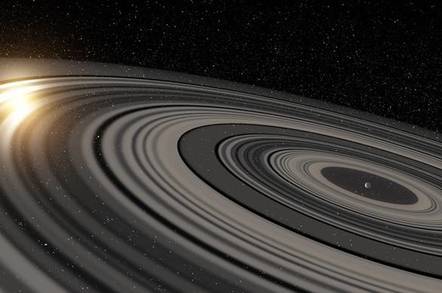 The Cassini space probe has begun a series of orbits designed to swing it through the edges of Saturn's ring system.

"It's taken years of planning, but now that we're finally here, the whole Cassini team is excited to begin studying the data that come from these ring-grazing orbits," said Linda Spilker, Cassini project scientist at the Jet Propulsion Laboratory (JPL). "This is a remarkable time in what's already been a thrilling journey."

The probe isn't taking pictures of this faint outer ring, but is instead focusing its other instruments at the planetary phenomenon. Large ring systems will be photographed and we can expect our best views yet of one of the solar system's most brilliant displays that so captivated Galileo – although the 17th century astronomer mistook them for huge moons.

This outer ring isn't expected to give Cassini much of a problem, but the engine port has been covered just in case and its high-gain antenna is being used to shield as much of the instrumentation as possible. Cassini is travelling at thousands of miles per hour so should blast though the ring with minimal time for a collision.

"With this small adjustment to the spacecraft's trajectory, we're in excellent shape to make the most of this new phase of the mission," said Earl Maize, Cassini project manager at NASA's Jet Propulsion Laboratory, Pasadena, California.

That journey will end on September 15, when the probe heads for the planet itself on its final mission. The probe will send back data on the composition of Saturn's upper atmosphere for as long as possible before it is destroyed. ®