Watch your back, Netflix: Viu on track for 10 million subs next year

iFlix, Viu flicks – they're all coming for Netflix 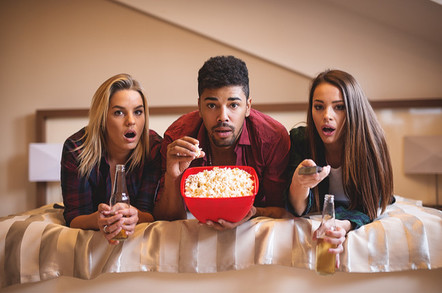 Analysis Hong Kong pay TV operator PCCW Media claims it has racked up 4 million active users on its OTT video service, Viu, after just one year of activity. An uptake of this pace presents Netflix, which recently made its belated entrance into South East Asia, with an almighty mountain to climb.

Viu has every chance of surpassing the 10 million subscriber mark by this time next year, on the back of the announcement that it launched in the Philippines this week, which has around 30 million OTT video users there for the taking - adding another booming market to Viu’s presence in Hong Kong, Singapore, Malaysia and Indonesia.

As Netflix waltzed into South East Asia at the start of the year, the world has been poised to watch the US giant add some extra spice to a market which was already heating up nicely, but instead it has seen the local OTT players continue to thrive unchallenged.

However, there remains an air of optimism that Netflix can maneuver itself a home in South East Asian regions where no native rivals have cemented a position.

Part of Viu’s recipe for such rapid success has been its partnerships with South East Asian telcos such as Telekom Malaysia, which has been offering Viu to its 2.3 million broadband subscribers since February this year. This is much in the same way that Netflix has championed Europe and the US by signing deals with major operators to include its content in their pay TV offerings – but this is either something it has failed to replicate outside of its comfort zone, or decided not to pursue, or at least not yet.

Viu has also tapped Korean broadcasters including SBS, KBS and MBC, and has a wealth of deals with Korean, Japanese, Malaysian, Indonesia, Chinese, Taiwanese, and Hollywood content providers.

A freemium strategy (part free, part paid) obviously gives Viu a leg up over Netflix in terms of viewing figures, claiming that it doubled video views from Q2 to Q3 this year - recording more than 218 million video views in the third quarter. PCCW also says users watch an average of 1.2 hours a day.

Viu’s previous owner, Vuclip, paved the way for the service with investments in streaming technologies including its patented Dynamic Adaptive Transcoding technology. It has also brought in the expertise of vendors on the OTT video technology scene, such as Verimatrix for DRM, Harmonic’s encoders, and the industry’s most widely deployed recommendation engine from ThinkAnalytics.

Viu has long included compatibility for downloading content and just this week Netflix made the long-awaited plunge. Other local players are also broadening their horizons to include this feature, one such operator is Astro Malaysia with its Tribe subscription OTT video offering. Like Viu, Astro is also taking Tribe down the telco partnership route; tapping Globe Telecom in the Philippines and Axiata XL in Indonesia – with a combined mobile subscriber base exceeding 100 million.

The less established iFlix, which came to life in May 2015, has landed a $45 million investment from Sky to chase the same dream of Asia Pacific SVoD domination, to go with cash from Catcha Group and Philippine Long Distance Telephone Company. The rapidly growing OTT video provider has tied up deals with Hollywood and most of the local telcos – a deal which seems to be Sky’s attempt to get in place before Netflix seizes any significant foothold in South East Asia.

Viu, along with another popular service Hooq, owned by Singapore Telecom and Sony, both recently spread their wings into Malaysia, Thailand and the Philippines – claiming significant wins in landing Korean TV dramas for distribution outside of South Korea. The Philippines is one, and Viu will initially be testing the waters with its freemium service before launching the full premium offering.

Even in South East Asia, Netflix cannot escape its fierce rival, Amazon, which recently launched an attack by offering an annual subscription to Amazon Prime in India at the same price point of a monthly subscription to Netflix. Amazon will expand this next year to include Instant Video for an introductory offer of $7 for the first year, and $14 thereafter.

How can Netflix possibly compete with this? It will surely have to rally some major Bollywood content partnerships, but beating the local Indian OTT players such as Yupp TV, which is going from strength to strength, will not be an easy task – even with Netflix’ ability to offer a blank check.

The likes of Viu and Hooq put up a good challenge to Netflix in terms of low pricing and plentiful local content, but with Netflix’s strong links to Hollywood and success in original content, the fight is far from over. The outcome may well be that local players may have to partner with a US company such as HBO in order to continue challenging Netflix. Regulatory hurdles are another obstacle to overcome for companies trying to make it in unfamiliar territories.

China has been a particularly difficult market for Netflix to break into, something made evident by its recent announcement that it will be backing off and instead licensing its content to existing players in the Chinese market, rather than trying to barge its way in. Although, there are still lucrative opportunities waiting outside China.

There were some 494 million active OTT video viewers in Asia Pacific in 2015, according to Media Partners Asia analysts – that’s a considerable pot of gold.

Janice Lee, managing director at PCCW Media Group, said, “As OTT takes root and continues to develop rapidly in Asia, Viu continues to stride forward with the launch of its service in the Philippines, a vibrant market with over 30 million viewers who regularly watch videos online. We are confident that our Philippine launch will replicate the growth and success we have experienced in the region.”