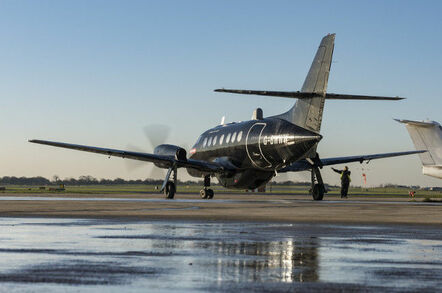 An autonomous aeroplane that uses onboard cameras to "see" events around it is being tested by BAE Systems.

The modified Jetstream 31 aircraft operates from BAE's base at Warton and normally flies with two pilots aboard, who are in charge of takeoffs and landings.

Building on previous research and development work which took place under the code name ASTRAEA (Autonomous Systems Technology Related Airborne Evaluation and Assessment), the latest trials with the Jetstream include the use of cameras, rather than radar, for the aircraft to detect clouds and other aircraft and take appropriate action.

BAE described this process as follows: "The testbed contains an aircraft identification antennae which detects other aircraft's transponder signals as well as a cockpit-mounted camera acting as an 'electronic eye'. This links to the aircraft's computer systems and enables the Jetstream to 'see' potential hazards even if no signals are being emitted. The 'electronic eye' of the Jetstream can also recognise different cloud types and, if needed, plot a course that allows evasive action from challenging weather conditions."

The test flights take place between Warton and Inverness. A ground control station, commanded by a qualified pilot, supervises the autonomous phase of each flight.

The project is funded by BAE itself and is taking place in conjunction with NATS, the UK's privatised air traffic control service.

Maureen Mccue, BAE Systems' head of research and technology for the military aircraft and information business, said: "Our priority as always is to demonstrate the safe and effective operation of autonomous systems and together with NATS we are working towards the possibility of flying our own unmanned systems in a highly controlled environment in the UK."

Full-size autonomous aircraft are rare outside military settings. Toy drones and full-sized drones such as the infamous US Predator are all commonplace sights but nervousness about putting large numbers of human lives at the total mercy of computers means autonomous aircraft technology has not been rolled out to airliners or other commercial aircraft.

Nevertheless, all but the critical takeoff and landing phases of modern airliner operations are done almost entirely by computer. Modern airliners are all fly-by-wire aircraft – that is, there are no physical connections between the cockpit controls and the aircraft's ailerons or engines, for example – and modern autopilot systems are more than capable of flying instrument approaches up to the final few tens of feet above the runway.

Introducing computers at the command stage – deciding where the aircraft should go as well as the precise mechanics of how it gets there – is probably bad news for professional pilots and good for airlines and aircraft manufacturers, if they can convince the public to accept the concept. ®