Yup, it's still there and lifeless as ever before 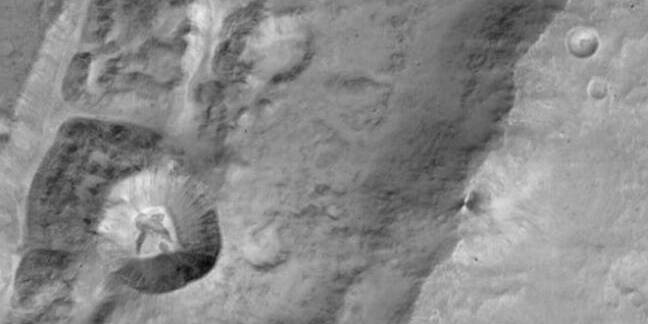 Volcanoes to the left of me, chasms to the right, here I am – sniffing the atmosphere for you

Video The European Space Agency's ExoMars orbiter has beamed back its first photos and sensor readings of the Red Planet after circling the harsh dust world.

The agency's astro-boffins needed some good news: last month, their Schiaparelli Mars lander – which was dropped from the ExoMars craft – smashed onto the Martian surface after it convinced itself mid-descent it had already landed and thus cut off its thrusters – in reality, it was nowhere near the ground.

Now the rest of the spacecraft, in a long elliptical orbit around Mars for the moment, has reported back and all systems are functioning fine, we're told.

The orbiting probe, dubbed the Trace Gas Orbiter (TGO), has been firing off its Colour and Stereo Surface Imaging System (CaSSIS) to take high-resolution shots of the Martian surface. Meanwhile:

The CaSSIS images have been far better than expected for such an early stage in the mission, said Professor Nicolas Thomas of the University of Bern. The spacecraft is currently in such an elliptical orbit that it skims the Martian surface at 250 kilometres up and then shoots out over 100,000 kilometres from the planet, taking images as it can.

"We saw Hebes Chasma at 2.8 metres per pixel," he said. "That's a bit like flying over Bern at 15,000 kilometres per hour and simultaneously getting sharp pictures of cars in Zurich.

"A lot of public attention has been on the failed landing of Schiaparelli, but TGO has been working really well, so we have been extremely busy in the past month."

Some might say that there are already enough orbiting cameras around Mars and why do we need another? But the CaSSIS camera is state-of-the-art for photographing the planet and is designed to be used in conjunction with the TGO's other instruments and to help correlate the data.

For example, the camera can cover eight-kilometre-wide swathes of the planet's surface in four different wavelength ranges and in color. When FREND detects the signatures of water just below the surface, the camera can perform a careful examination of the ground and try to quantify what future explorers should be looking for.

The TGO will work to stabilize its orbit over the next few months, and will eventually orbit approximately 400 kilometres above the Martian surface. It's expected to last for years, and will work with other orbiting hardware to find the best features for mankind to exploit when it gets there. ®