Fujitsu pivots from chips to leaves with salad-as-a-service

Finnish factory to change diet of the happiest people in Europe 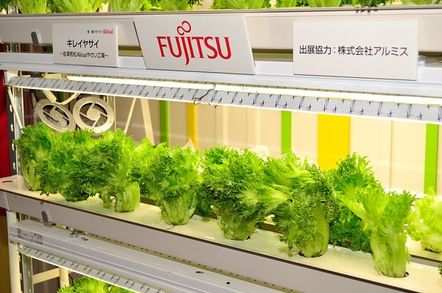 Fujitsu has launched a joint venture to supply the snowbound, sausage-and-root-veg-loving residents of Finland with scrummy salad all year round as part of its efforts to make farming a cloud-based endeavour.

The "factory" will be based on Fujitsu's "Akisai", which the firm describes as "Fujitsu's food and agricultural cloud service, along with fully artificial lighting using LEDs, multi-tier growing trays, and full automation".

Finns, with their excessively long winters, have a diet which majors on spuds, grains, berries, pork, duck and cabbage, as well as, apparently, the highest per capita coffee consumption in the world. Food is also expensive compared to the rest of Europe. Counter-intuitively, perhaps, the Finns are also at the top of the European happiness index.

The aim is to produce "a steady, year-round supply of vegetables, such as baby greens and leaf lettuce, in Finland, which has few hours of sunlight during its harsh winter".

Fujitsu, which has been using a chopping block in a rather less green way across Europe as a whole, where it plans to shed 3,300 jobs, said that as well as packaging the salad, it will "package the know-how and cloud services resulting from this business and deploy them throughout the European Union".

The cynical might turn their noses up at the idea of growing salad on the cloud. However, Fujitsu is deadly earnest about the idea. Indeed, this writer sampled some of its first products a couple of years ago, in the crinkly shape of low-potassium lettuce grown in former chip clean rooms.

The company said it envisioned a future where at least some agricultural products were grown in the middle of the city this way. Apart from the obvious savings in transport and logistics, using a controlled environment meant they could tailor the nutrients the plants absorbed. In the case of lettuce, this meant cutting the uptake of potassium, which meant the lettuce could be consumed by people with renal problems, who normally have to forgo salad.

It also means less issues with pests or other contaminants, prolonging the shelf life of the produce. Certainly the head of lettuce we brought back from Japan lasted weeks and weeks – which may or may not be slightly disconcerting, depending on your point of view.

More widely, Fujitsu is just one company looking to bring technology to the farming sector, whether it's GPS-controlled, self-driving tractors, or super computers crunching weather patterns and/or controlling irrigation systems.

The problem is, as one Fujitsu exec says, farmers tend to "rely on their knowledge and their skill sets and intuition" rather than technology. Or to put it less politely, farmers seem to believe that centuries of folk wisdom and handed-down experience are a better guide to growing spuds than a data scientist with some LED lightbulbs. ®