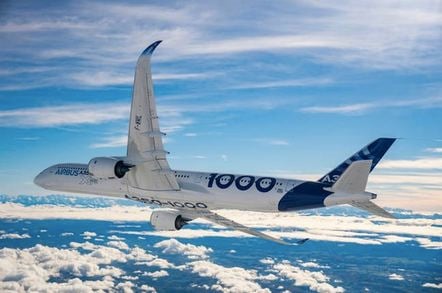 Airbus has successfully flown a new commercial jet model, with the first A350-1000 taking to the skies over Toulouse on Thursday.

The A350-1000 is the new member of the A350 program, Airbus' attempt to offer a long-haul twin-engine jet a little larger and rather more modern than its A330 range, and also cheaper to operate than comparable Boeing models.

In its debut four-and-a-bit-hour test flight the new plane looped around near the Pyrenees. Airbus has declared itself happy with the first flight and confident the new model will prove attractive to airlines keen to find an alternative to Boeing's bigger 787s and 777s.

The new model also competes with Airbus' own A330, which is now an old design missing the lightweight materials that form the majority of the A350 airframe and therefore keep its fuel consumption low. An A330 refresh is also in the cards.

Growth in Asian markets means there's nearly always a queue for any long-haul jet: over 190 A350-1000s were ordered before it rolled off the factory floor, never mind took to the skies. The same will happen for the forthcoming 777x, even though Airbus claims the A350-1000 is more economical to operate.

Airbus hopes to deliver its first A350-1000 into service next year. Three test planes will go through extensive tests in coming months to ensure the new model satisfies aviation authorities it is sufficiently safe to be allowed into service. ®