US telecoms industry weighs up the Trump effect 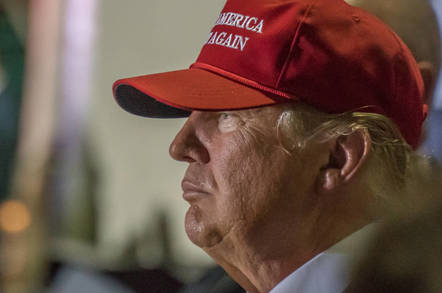 Comment As in every sector of US life, the telecoms industry is trying to work out what the shock election of maverick candidate Donald Trump to the presidency will mean for its operators and suppliers.

There are few clues, of course – telecoms, even broadband, were not major campaign issues; Trump obviously has no track record of voting on these matters. But some of his stated intentions, if he follows through in policy, would deeply affect this industry, including trade barriers with China or Mexico. And like any new president, he will have a direct impact when a new Federal Communications Commission (FCC) is appointed.

One issue on which Trump did speak out during the election campaign was the proposed AT&T/Time Warner merger, which he said he would derail. And he made some vague comments about net neutrality, such as: "Obama’s attack on the internet is another top down power grab.”

These certainly did not amount to policy, but telcos may take them as a sign of hope that he will favor a change to the recently agreed rules, to make their lives easier. Although the FCC’s amended neutrality code was upheld by a Washington DC appeals court, the telecoms industry is taking their appeal to the Supreme Court (which has not yet agreed to hear it). If Trump appoints a conservative judge to fill the current Supreme Court vacancy, and a pro-telco FCC chief, the rules could be overturned.

Once a new Republican president takes office in January, current FCC chairman Tom Wheeler is likely to step down (although his term doesn’t actually expire until 2018). His successor will be chosen by Trump and the new FCC would include three Republican and two Democrat Commissioners.

Already, the president-elect has pulled back on his famous pledge to “drain the swamp” of Washington lobbyists, special advisers and career politicians, by appointing Jeffrey Eisenach – a long time lobbyist for Verizon and advocate of light-touch regulation – as an aide, advising on telecoms policy including the FCC and neutrality.

While these issues will have a deep effect on the telecoms industry at home, Trump’s stance on trade barriers, especially with China, would affect many US vendors on a global basis if it turns into policy. He suggested, during the campaign, that he would impose 45 per cent tariffs on imports from China, an idea which provoked this response from Chinese news-paper The Global Times: “China will take a tit-for-tat approach then … US auto and iPhone sales in China will suffer a setback, and US soybean and maize imports will be halted.”

And 35 per cent tariffs were also suggested for other trading partners such as the European Union, Korea, India and Japan. If even a more diluted version of the proposed trade wars transpired, it would hit companies like Apple, Qualcomm, Intel and Cisco, all in the top 20 list of US exporters. Electronic equipment represented $163.1bn of outgoing international trade last year, up 36.9 per cent since 2011.

Many of these more outlandish campaigning soundbites will, of course, not turn into real actions, but the general uncertainty before a transition of power is undoubtedly greater than usual this time, because of Trump’s outspoken style and because he is, politically, an unknown quantity. That will affect telecoms like other sectors.

Aneil Rakity, managing director at consultancy Ovum, wrote in a column: “In the short term, there will be a general slowdown of major decisions in capital and investment by US and international firms as they wait to get a better understanding of the new administration's trade, tax, immigration, and foreign policy … The uncertainty will last for at least the next six months, and it won't be until mid-2017 that Trump starts to share more about these topics and proposed changes to policy.”

And CM Research wrote: “The biggest benefit to the US tech sector will come from lower tax rates. The biggest risk is trade wars that result in higher tariffs and retaliation against the US tech companies. The wild card is regulation: net neutrality rules – if relaxed – could shift the balance of power from Internet companies to telcos.”

Telecoms kit supplier shut down for carrying on work of two firms that had been... shut down

Telecoms fail in UK takes down passport scanners in Australia