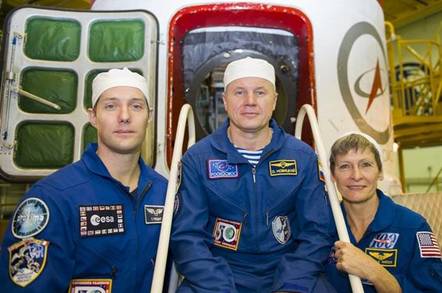 It has been a good 24 hours for the European Space Agency. Not only has its first four-in-one Galileo satellite launch gone flawlessly, but ESA astronaut Thomas Pesquet is on his way to the International Space Station.

At 1306 GMT on Thursday, an Ariane 5 rocket lifted off from its spaceport in Kourou, French Guiana, carrying satellites 15–18 in the forthcoming European-controlled Galileo global positioning network into low-Earth orbit, and they were put into their parking orbits.

Engineers will spend the next few days babying them into their exact position to augment the growing network of satellites in Galileo. After six months of system testing, they will be ready to start guiding travelers around the planet when Galileo goes into full service sometime around 2020.

"With this 75th successful launch in a row, Ariane-5 sets a new record within European-developed launchers and proves once more its reliability," said Daniel Neuenschwander, ESA's director for launchers.

The launch is, however, bad news for the Russians. ESA had been using Russian rockets to send up the satellites two at a time, but with the Ariane system proven, Roscosmos will have to look elsewhere for launch funds.

In the meantime, the lack of any orbital delivery systems certified for human space travel means the Russians will still be getting paid for providing a taxi service to the ISS. French astronaut Thomas Pesquet, NASA's Peggy Whitson, and Roscosmos cosmonaut Oleg Novitsky lifted off from Baikonur cosmodrome in Kazakhstan at 2020 GMT.

They'll perform 34 orbits around the home planet before reaching the ISS and are expected to dock on Saturday night. It'll be Pesquet's first mission to the ISS, the second for Novitsky, and Whitson's third. ®