Hacker's Mac pwning expedition: 'Help, I've got too many shells!' 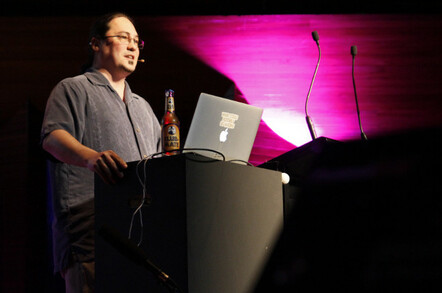 Kiwicon When Dan Tentler hacked writer Kevin Roose's Mac, his chief problem wasn't trying to pop the shell; it was trying to rein in the hundreds of shells he spawned.

Tentler had been tasked with breaching Roose's computer for a documentary showcasing penetration testers' ability to compromise users.

Tentler, also known as "Viss", told the Kiwicon hacking conference in Wellington today how he manually wrote exploits to gain access to Roo's laptop after discovering it was a Mac, but soon had access to his webcam, email, and Nest CCTV cameras.

"Shells were spawning everywhere, hundreds, so I had to write some scripts to shut them down," Tentler told the conference.

With Roose's laptop boned, Tentler set about pushing limits. He set the Mac's text to speech tool to utter various sentences to mess with the writer. In one instance he made the computer say "wouldn't it be funny if I started talking to you" while Roose was in a cafe, frightening the life out of the unsuspecting writer.

In another, he made the computer remark "you look bored" after spying on him through his open webcam.

Tentler continued the absurdity getting one of his friends to drive to Roose's house and stand in front of the writer's now compromised webcams with a sign reading "Viss was here". ®