Long-distance Asian internet hookups are now faster then ever

We're talking about the new Facebook-funded APG submarine cable. Not that 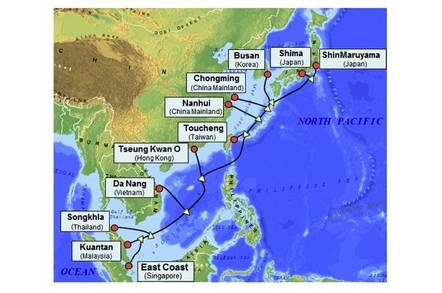 If you fancy a long-distance Asian internet hookups now available, we have good news: the Asia Pacific Gateway (APG) submarine cable has been completed and brings 100Gbps of connectivity to the region.

The cable lands in China, Hong Kong, Taiwan, Japan, Korea, Malaysia, Singapore, Thailand and Vietnam during the course of its 10,400km journey.

Designed to be typhoon-and-earthquake proof, thanks to the use of multiple landing points whenever possible, the new cable also connects to other cables for extra redundancy. There's also links to trans-Pacific cables to help get data from the USA into Asia faster. Which probably explains why Facebook kicked in some cash to get it built, along with 11 carriers from around the region.

Speaking of faster the APG boasts 100Gbps optical transmission capabilities and capacity of “more than 54 Tbps”. Which is a lot of cat videos.