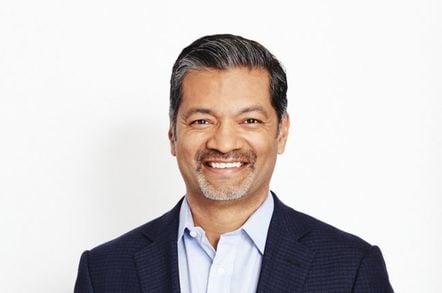 Interview Dev Ittycheria, chief executive and president at MongoDB, took a moment out from the company's European event to tell The Register about its strategy for the future.

The NoSQL business is approaching its tenth birthday, but plans for neither profit nor exiting are on the immediate horizon. Due to the hundreds of millions in capital it has managed to bag from investors, it is still committed to aggressively burning money and chasing growth.

While engineers still account for the majority of staff at MongoDB, their numbers may be eclipsed by sales bods next year as the company intends to start deploying people around the world.

Speaking to The Register at its European event in Old Billingsgate, London, Ittycheria explained that his background in both the entrepreneurial and operational sides of technology startups, as well as working as the managing director for a venture capital firm, kept him grounded where others might "overreact to certain issues and events".

What kind of issues in particular? "Scaling issues," he quickly responded.

"Candidly, one of the reasons I joined MongoDB was – as a VC – I had a look at the NoSQL space... and when I did my research and diligence with my team it became very clear that MongoDB was far ahead of everyone else in terms of the size of the community, developer mind share and so forth."

The company was smaller, but Ittycheria was pleased with the factors he and his team had identified "because what they really showed me was product-market fit".

Ittycheria arrived specifically to deal with the issues MongoDB had experienced in growing the company. "I brought in a bunch of new senior execs in the organisation to really help scale it to the next level, and since then we've grown the business almost two-and-a-half times the size it was."

Ittycheria wouldn't be drawn on the specifics of the size of the company, but told The Register that its revenues were currently between $100m and $200m annually. "Put it this way," he added. "There's companies who've gone public who are smaller and going slower than us."

This was not said to signal that the company was imminently going public, but that MongoDB was at a scale where that option could be chosen and acted upon quickly.

Consolidation has begun in the NoSQL space, where MongoDB arguably remains the most popular offering. "I definitely think that there's a shake-out happening in the industry," said Ittycheria, "so we're starting to see some of our NoSQL brethren start to struggle."

MongoDB competitor RethinkDB was touted as a potentially final rival when it pocketed over $8m in its Series A funding round in 2013.

In October, however, founder Slava Akhmechet announced that RethinkDB was closing down, stating: "We worked very hard to make RethinkDB successful, but in spite of all our efforts we were ultimately unable to build a sustainable business."

This will become a more common story, according to Ittycheria. "We know a couple of others who are on the market, we get calls from companies who are trying to sell themselves. I know from my venture capital friends and the community that people are not putting a lot of new money into new companies in this space. They feel like the race has already been won. But that being said, we feel very bullish about our future."

For one, MongoDB reckons "the market's enormous" and offers them an equally enormous opportunity to grow.

Two: we think we have a huge lead in terms of product and scale of our business. Three: the incumbents are incredibly vulnerable. And four: we're seeing customers materially make big bets – we're closing eight and seven-figure deals all over the place with customers of all shapes and sizes.

"We're now in year nine of the company journey, and we've probably had access to more capital than say Oracle or MySQL did in those days, and so we can invest aggressively and we're seeing the results." ®