Traffic can be both good and bad 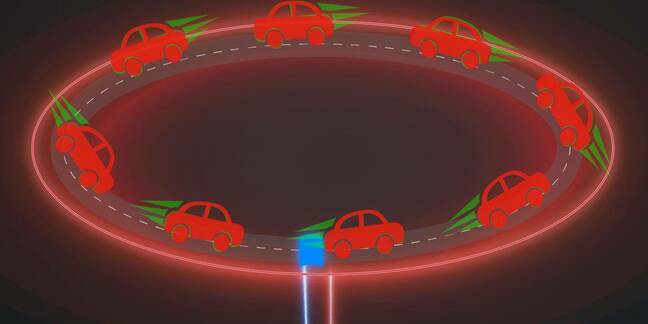 It may be possible to crack the mystery of why the universe is expanding at an accelerated rate, if gravity can be measured through a “quantum traffic jam” of ultracold atoms.

A paper published in Physical Review Letters [paywalled] proposes a hypothetical experiment that could provide scientists with a new way of measuring gravity.

The idea is to use a laser beam to manipulate ultracold atoms – only a few degrees above absolute zero – into forming a tiny ring-like structure about 10 to 20 micrometers in diameter. The laser also kicks the belt of atoms into motion, and it starts to rotate like a gyroscope.

Physicists from the US National Institute of Standards and Technology (NIST) and the University of Maryland describe the experiment as a “quantum traffic jam.” The atoms are like cars, circling along a roundabout.

But being a “quantum traffic jam,” the cars, or atoms, have a curious property of being simultaneously locked in a standstill and moving along the ring. The laser whips the atoms into a state of superposition, where they exist across various possible quantum states. One state – where they aren’t moving – and one where they are.

It acts as an atomic interferometer, where the small displacements of the atoms are affected by gravity. But, unlike the Laser Interferometer Gravitational-Wave Observatory (LIGO), which measures gravitational waves over large cosmic distances, the ring of atoms can only probe the effects of gravity over 10 micrometers – about the width of a human hair.

If the experiment is feasible, the quantum traffic jam could show how gravity behaves over short distances. Any anomalies could provide clues to why the universe is expanding at an accelerated rate.

Physicists believe dark energy counteracts the effects of gravity, and is a repulsive force that is making spacetime stretch at an increasing rate. The origin of dark energy is unknown, and some physicists believe it could be down to tiny quantum fluctuations that result in virtual particles popping up in space and existing for a short time.

The mutual repulsion between these virtual particles makes the universe expand. “One possibility is that the basic fabric of spacetime only responds to virtual particles that are more than a few micrometers apart, and that’s just the sort of separation we could explore with this ring of cold atoms,” said Jacob Taylor, coauthor of the paper and associate professor at the Joint Quantum Institute at the University of Maryland.

There’s more to a quantum traffic jam than measuring gravity, the researchers said. Because it operates on superposition, it could also be used as switches for quantum computers. The 0 in binary code represents a state where the atoms are stuck in a traffic jam, and 1 is when the atoms are moving along the ring.

Although the quantum traffic jam looks promising, it hasn’t been experimentally proven yet. ®