Did the doc A) send him home, B) buff the gold, C) use aspiration method? 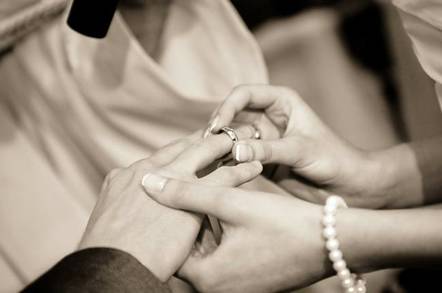 A South African was forced to undergo rare penile strangulation surgery after slotting a wedding ring over his tackle that he was unable to pull off, according to a medical journal.

But he was unable to remove the wedding band and so was escorted in “severe pain” by his mother to see the docs in Van Velden hospital in the Limpopo province, the South African Medical Journal reported.

Apparently, his wife had given birth by caesarean section a fortnight before, but the SAMJ didn’t specify the relevance of this factoid. The date of the incident was not recorded.

The hapless fool was rushed to theatre and plied with ketamine before the scrubs endeavoured to remove the ring by using the string method but this “failed because of the excessive swelling”.

An orthopaedic oscillating saw was then used but the ring was “too wide and strong” with “limited space” due to the tumescent tool.

The third plan and ultimately successful attempt involved the man’s penis being punctured by a 20ml syringe and pink needle to release the stored blood.

Thankfully, the oedema - fluid retention - subsided and after three days of antibiotic use, the man made a full recovery. The conclusion?

Alternatively, men could think before applying things to their members - prevention is better than cure. ®