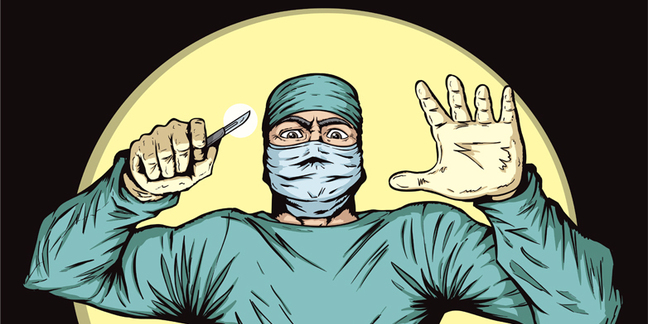 Capita has taken the knife to the business, cutting out an entire layer of management and slicing and dicing the divisional structure, six weeks after its first profit warning.

The blundering integrator and outsourcing giant said it will fold the current units into six; private and public sector partnerships; professional services; asset services; digital and software services, and IT services.

This means the standalone Capita Europe, customer management, insurance and benefits services, integrated services, and workplace services businesses will be no more.

Andy Parker, CEO at the company, claimed "reshaping and simplifying" the organisation and management structure would lead to "good financial performance in 2017 and beyond".

Each of the business lines will be run by an executive officer that will report directly to Parker and the wider board rather than middle managers to "increase oversight" and "strengthen operation control".

As such, "the former position of COOs, to whom the divisions use (sic) to report, has been removed", Capita confirmed.

The first COO to leave is Dawn Marriott-Sims, who had overseen the IT Enterprise Services biz. She has quit with "immediate effect", the company said. A number of other senior heads from ITES have left in recent months, including former boss Peter Hands and head of tech solutions Simon Furber.

The big changes here are hardly surprising as ITES was the major cause of the recent profit warning, particularly the reselling elements, while the Workplace Services unit was also highlighted. Capita warned profitability for the subsidiaries had reduced by £30m at the halfway point of this year compared to 2015.

Troubles elsewhere in Capita included the cost of a delayed IT system under Transport for London's congestion charge contract and a contractual dispute with the Co-Op concerning the "transformation of services".

For the year, Capita said pre-tax profit is estimated to be between £535m and £555m, compared to earlier projections of £614m.

Capita said the "scale and anticipated ongoing benefits of current cost reduction actions" will be outlined in early December when a trading update will be released to the London Stock Exchange. ®