Apple, media, 400-pound hackers, look to be in trouble 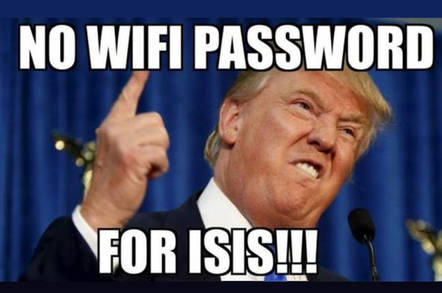 The United States Presidential Election has been run and at the time of writing looks almost certainly to have been won by Donald Trump.

Which means we now have a decent idea of what's in store for the global technology industry in the next four years. And it looks like a wild ride: Trump's policies include a clamp down on H-1B visas, which will make it hard for US-based businesses to bring in skilled tech talent from abroad. H-1B critics argue the visas are a way to keep wages low by bringing in foreigners who work for less than American citizens. Supporters say the technology industries have a shortage of workers and therefore need foreigners to both fill seats and keep innovation humming along.

Trump has also promised tariffs on imported products, especially from China, as part of a plan to ensure more companies manufacture in the USA. Apple shareholders beware: Trump once singled out the company as he feels it should “start building their damn computers and things in this country, instead of in other countries.”

Trump's vision for Cybersecurity calls for an “immediate review of all U.S. cyber defenses and vulnerabilities, including critical infrastructure, by a Cyber Review Team of individuals from the military, law enforcement, and the private sector.” That team would be charged with devising “... detailed protocols and mandatory cyber awareness training for all government employees while remaining current on evolving methods of cyber-attack.”

The policy also calls for joint Federal, State, and local task forces to respond to cyber threats and a vision to “Develop the offensive cyber capabilities we need to deter attacks by both state and non-state actors and, if necessary, to respond appropriately.”

Another of Trump's policies suggested Bill Gates should turn off the internet to stop Islamic State spreading online propaganda.

Trump opposed the plan to transition the internet's technical functions out of the United States' hands. Whether he can reverse that decision remains to be seen.

On the campaign trail, Trump also called for Russian hackers to retrieve emails from Hillary Clinton's private email server. And of course promised a prosecution of Clinton for operating that server.

In the first presidential debate he characterised IT security types as weighing 400 pounds and working from their bedrooms. Persons who fit that description may now have something to fear beyond their cholesterol levels.

Democratic candidate Hillary Clinton went to the election offering a Initiative on Technology & Innovation that included opposition to the Stop Online Piracy Act (SOPA), a pledge expand and prioritise the United States Digital Service. Clinton's immigration policy offered free green cards to foreign STEM students graduating from US universities with masters or doctorates, plus a new class of visa for foreign startup founders who could show they've already attracted investment.

Clinton also promised substantial investment in broadband infrastructure including a 5G rollout to boost Internet of Things adoption. Another plank in Clinton's platform was opposition to Internet censorship, at home and abroad. By contrast Trump's called for easing of libel laws to make it easier to sue publishers, singling out The Washington Post and its owner, Amazon.com founder Jeff Bezos as a likely target for legal action.

Both candidates opposed the Trans-Pacific Partnership, which includes copyright-enhancing provisions.

Strap yourself in, world. This could be a bumpy ride. ®