Tariff bluster or protectionist polices to bank on? 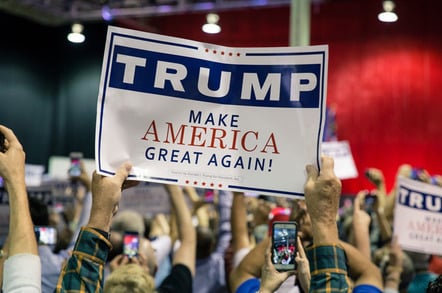 Comment It's tempting and all too easy to sneer at Silicon Valley for being out of touch with not just the world but the US as well.

Huge salaries, a high concentration of a single industry and a self-referential culture oblivious to how its ideas could do anything but change mankind don't help either.

The sight of tech's leaders dining with a Democrat president or rubbing shoulders with bankers and presidents at Davos also contributes to this.

The fracas over the Valley's ganging up on billionaire Peter Thiel for backing Donald Trump confirmed this reputation, consolidated by Trump's ability to convince just enough of the US to send him to the Whitehouse.

California, home to Silicon Valley, was one of the states to vote for the other "guy".

Few residents of that narrow strip south of San Francisco are as well known as Apple and it was they who were held aloft as everything wrong with America.

In Trump's view, Apple is emblematic of US manufacturers responsible for killing domestic jobs by buying components made and assembled overseas.

The iPad employs chips designed in Britain by ARM, memory from South Korea's Samsung and Japan's Toshiba and Elpida Memory, with assembly by Foxconn in Taiwan.

But step back and Trump's economic nationalism extends beyond the obvious target of Apple – it takes in a broad swath of tech firms large and small from "ordinary" US states and places.

Up in the Hillary-Clinton-supporting northwest, Microsoft uses the Foxconn-like Pegatron in Taiwan to build its Surfaces, which also happen to employ Samsung's SSD.

Technology firms across the US, not just Silicon Valley, are plugged into the global sourcing and integration of components.

The rise of IoT takes this into newer, smaller devices – no longer just the big stuff of enterprise or the shiny stuff in the hands of consumers.

US firms that are part of this global supply chain will pay more in tax.

Trump has proposed to tax goods from US companies made abroad and imported with a 35 per cent levy on goods coming from Mexico. He has also talked of a 15 per cent tax on "outsourcing jobs" and an apparent further 20 per cent tax for all imported goods.

Trump has also spoken of a new trade deal with South Korea, describing President Obama's existing agreement as "embarrassing" and bad for the US.

Trump has put himself forward, too, as his country's deal negotiator in chief. If he is true to his word, US technology that cannot be made or assembled domestically will see its costs going up in the form of increased taxes and new import tariffs. To get around that, firms will need to build infrastructure in the US and take on, presumably, less skilled and more expensive domestic employees.

With Brexit in the UK taking down the value of sterling against the dollar we've already seen what happens to US-based technology when prices up. The price is passed on to the consumer, not absorbed by the manufacturer.

It's therefore reasonable to expect the price of tech to increase domestically in the long term and for the cost to feed in internationally.

There is a "but", however. Donald Trump himself. Given his propensity for verbal pugilism during the presidential campaign, it's difficult to know what words were intended simply to score points and grab the sound bite and which was actual policy in the making. ®