Tech Trump: Silicon Valley steps into the valley of unhappiness

It's a long litany of problematic positions 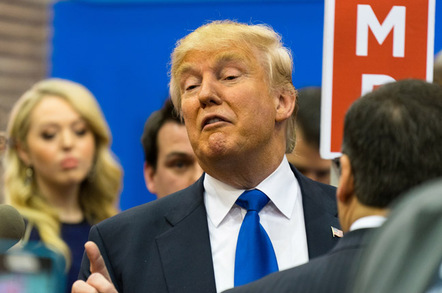 The biggest question facing millions of Americans this Wednesday is: just how much of what Donald Trump said on the campaign does he intend to actually try to make happen.

And in that respect, few are more fearful than Silicon Valley.

As we've already noted, Trump has backed a number of positions that go directly against the Valley's interests: from a clampdown on H-1B visas, to proposing tariffs on goods manufactured outside the US, to opposing trade deals.

But concerns go far deeper than that. Trump directly and repeatedly attacked both Apple and Amazon. With Apple, he proposed a boycott of Apple products until the iPhone maker agreed to allow a backdoor into its handsets so the FBI could retrieve information, and he singled out the California giant for his proposed trade tariffs, railing against the company's huge manufacturing bases in China.

As for Amazon, Trump focused in on CEO Jeff Bezos, seemingly slighted by critical Washington Post coverage of him (Bezos bought the Post in 2013), and argued that Bezos has a "huge antitrust problem because he's controlling so much, Amazon is controlling so much of what they are doing."

Trump has repeatedly demonstrated his willingness to go after people and companies that he feels have wronged him, and publicly stated a number of times – including in his victory speech – that he will target those he have been critics of his bid.

And while Trump has found fame as a successful businessman, he has never touched the tech industry or startup culture, instead working in the traditional field of real estate, as well as a huge branding effort of his own name across industries.

As such, Silicon Valley feels that Trump has little or no insight in their business approach. On top of which Trump has held a long persistent belief in a mercantilist economy when nation states protect their own companies from outside forces. That isolationist approach is anathema to tech giants who very success is built on global trade and availability.

Perhaps highlighting the feelings of many in the Valley, one notable outburst came on stage at the WebSummit taking place today in Lisbon, Portugal. On the main stage, entrepreneur and angel investor Dave McClure had a full meltdown over the election results.

"If you’re not fucking pissed right now, what is wrong with you?" he yelled at attendees - most of whom don't live in the US. "I'm pissed off, I'm sad, I'm ashamed, I'm angry," he ranted.

There may be an upside however: Trump has proposed allowing US companies to repatriate the billions of dollars they have stashed overseas by paying just 10 per cent in tax. That would bring a lot of money into the country and undoubtably see big tech share prices jump as a result. Longer term, however, Silicon Valley has much to be wary off from a President Trump. ®