'See if we care, slacktivists' 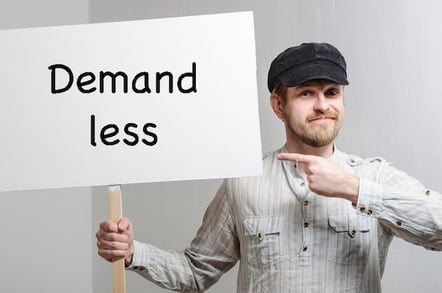 Virgin Mobile has finally upgraded its network to 4G – with an eye-catching deal: Facebook and WhatsApp data usage won't count against your monthly data bundle, a practice known as zero rating.

With zero rating, no money changes hands between the network and the service, and in the USA, the practice has proved hugely popular. T-Mobile's "Binge On" service allowed video services to opt-in, giving users toll-free streaming, with the catch that the video was downsampled to 480p resolution.

"This offer does not result in any blocking or throttling of content, and there is no prioritisation of WhatsApp or Messenger traffic," a spokesperson told the FT.

Even though zero rating was never an "Original Sin" when the Net Neutrality doctrine was conceived, it has recently become the focus of digital activists and lobby groups that represent some large internet companies. They cried foul when Binge On was unveiled, and Google publicly grumbled.

Witchfinder General Professor Barbara produced a vast compendium of reasons why T-Mobile had sinned, including the novel argument that "Binge On harms free expression by favoring (sic) commercial entertainment over other forms of video content".

But to their dismay, Binge On turned out to be a hit, doubling video usage on the network, gaining a 99 per cent approval rating from users, and helping T-Mobile overtake Sprint. Google eventually joined in too. Empirical research of hard net neutrality rules in Chile, the Netherlands and Slovenia found no evidence to suggest that zero rating harmed consumers.

What helped convinced the FCC not to intervene was almost certainly the nature of non-discriminatory of T-Mobile's terms. Every potential video participant could see the cost (zero) and nobody was excluded. A zero-rating framework that dared to exclude startup messaging or video rivals to Facebook would most likely attract the attention of the European Commission, which has it in for the OTTs anyway. Although Google doesn't have the "outsized influence" (in the words of economist Hal Singer) in Europe that it enjoys with the FCC, but net nannies can still cause operators like Virgin Media plenty of trouble – thanks to the connivance of BEREC, the European quango (PDF) of telecoms regulators.

BEREC has infuriated ISPs and other service providers by adopting a much more dogmatic position on net neutrality issues than the ones European Parliament explicitly rejected when Barlaymont passed the telecoms package in 2015. BEREC has the job of turning the Parliament's intentions into guidelines.

BEREC advises that zero-rating is OK, er... except when it isn't. It's up to national regulators to decide that.

"Some practices are clearly prohibited – those where all applications are blocked or slowed down once the data cap is reached except for the zero-rated application(s). Others are less clear-cut and will be need to be assessed by NRAs against a number of criteria set out in the Guidelines," BEREC notes.

The ambiguity essentially invites net neutrality activists to have a go.

Surprised? You shouldn't be. Two of the four "wise men" chosen by BEREC to do this are legal professors who are strident advocates of hard neutrality – including the Witchfinder General herself – while a third has received funding from Google.

BEREC receives €4.1m funding from the European Union, but don't think Brexit will help: EEA/EFTA members like Norway are members, too. ®