El Reg was right: emailgate 2.0 is a fizzer 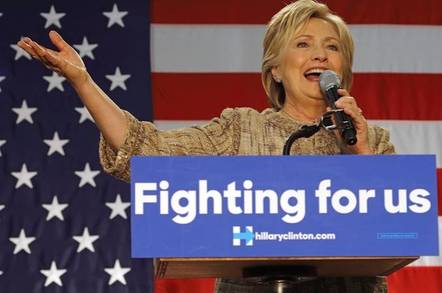 On Sunday night, after a week of sending US elections spinning and Presidential hopeful Hillary Clinton tumbling in polls, FBI director Michael Comey backed off and wrote to Congressional committee chairs that after "working round the clock to process a large volume of emails" found on a laptop seized a month ago from accused sex pest Anthony Weiner, the Fed's geeks quickly failed to find anything new – as The Register predicted two days ago..

We made that assertion after Comey last week wrote to committee chairs saying that he "cannot predict how long it will take to complete this". But the FBI failed to point out that of 650,000 emails apparently found on the laptop, a figure offered up to US media, at least 95 per cent could not possibly be relevant as they would be personal material related to Weiner alone.

The agency refused to admit to The Register that it was forensically inevitable that the job of finding which mails needed further scrutiny would be trivially easy on modern forensic search systems. We're confident it was probably completed last Monday morning.

All week, other FBI voices appear to have been leaking to help along an anti-Clinton agenda, spinning that the checking job would extend well beyond the election of the new President, along with a sheaf of other non-stories.

On Saturday, CNN and then Britain's Daily Mail breathlessly revealed that the FBI had indeed found Clinton-related emails in their search. Yes, folks, and that's why the FBI went to court in the first place to get a new search warrant, to replace one that was limited to investigating Weiner.

On Sunday morning CNN and then the Daily Mail had the further (non) shock revelation that FBI sources had told former New York Mayor Rudi Giuliani that Clinton-related emails has been found, even before the new warrant was requested. No news there, either.

Now, Director Comey has admitted that the job wasn't hard at all.

"We reviewed all of the communications that were to or from Hillary Clinton while she was Secretary of State" (form 2009 to 2013), he said. In consequence, the agency had not "changed our conclusions" from when the Bureau's year-long investigation of Clinton's use of a private email server wound up last July.

The FBI's previous conclusion was that there was no case for criminal proceedings against Hillary Clinton or her staff.

Singing to a slightly different tune on Sunday evening, CNN's FBI sources said that "the thousands of new emails were mostly personal and duplicates of what had already been seen". "The laptop which was found was about a decade old with lots of personal content on it not relevant to the investigation", according to a further one CNN source.

The FBI have now played both sides in the election. That's not new. Few in Washington have forgotten the massive secret files on U.S. politicos kept by powerful former FBI director Edgar Hoover . Then President Richard Nixon wanted the files, but they went instead to FBI deputy W. Mark Felt. Two years later, Felt tilted the whole of US politics and helped bring down Nixon down as Bob Woodward's secret source, "Deep Throat".

Thirty years later, secret and illegal directives given by President Bush after 9/11 empowered the FBI to dig into and collect American's personal communications of all types. The power of the agency and its secret files then grew exponentially. Forcing the resignation of CIA director David Petraeus five years ago 2012 was the most prominent victim of those new powers.

For the Washington political class, what's not to fear?

So when Trump spouted last Monday that this was "bigger than Watergate", in a sense he might be right. But not Watergate as he meant it. ®