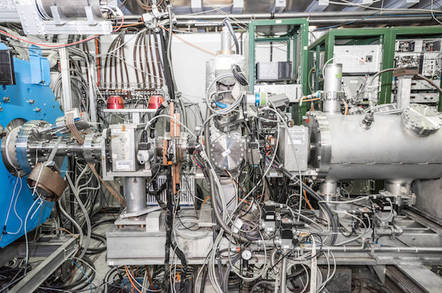 The organisation is checking the mass of the proton's antimatter twin, the antiproton, using a specialised spectrograph.

The measurement is an important test for basic physics: charge, parity and time (CPT) symmetry predicts (among other things) that a particle and its corresponding antiparticle should have exactly the same mass.

As CERN notes in its announcement of the experiment, any violation of CPT symmetry, even a small one, “would call for a review of our assumptions about the nature and properties of space-time”.

The experiment, carried out at CERN's Atomic Spectroscopy And Collisions Using Slow Antiprotons (ASACUSA) experiment, which unlike its famous atom-smasher works by slowing antiprotons down using near-absolute-zero temperatures.

ASACUSA cooled around two billion antiprotonic helium atoms to between 1.5 and 1.7 Kelvin, using a buffer of ordinary helium as the cooling medium.

That's a trick in itself. In antiprotonic helium one of the atom's electrons is replaced with an antiproton – it stays in orbit because, like an electron, it carries a negative charge. However, the CERN boffins have to keep the antiparticles from colliding with normal matter.

The electron cloud surrounding the whole atom (yes: in classical physics, there's only one electron left after an antiproton's taken its spot on the dance floor; but in quantum physics it exists as a cloud of probabilities) protects outside matter from encountering the antiproton – and that makes the atom stable enough for precision measurements.

In CERN's discussion of the experiment, Masaki Hori, group leader at the ASACUSA collaboration, says: “A pretty large number of atoms containing antiprotons were cooled below minus 271 degrees Celsius. It’s kind of surprising that a ‘half-antimatter’ atom can be made so cold by simply placing it in a refrigerated gas of normal helium”.

To measure the mass, the statement explains: “The measurement of the antiproton’s mass is done by spectroscopy, by shining a laser beam onto the antiprotonic helium. Tuning the laser to the right frequency causes the antiprotons to make a quantum jump within the atoms. From this frequency the antiproton mass relative to the electron mass can be calculated.”

And the result? No new physics yet: the measurement of a whole 17 femtograms of antiprotonic helium was better than previous measurements by “a factor of 1.4 to 10”, and antiprotons still look like they weigh what physics predicts: the same weight as a proton. ®

Comment Is there a difference and does it matter?