What a bee-lief! UK's asian hornet outbreak is over ... for now

No live sightings have been reported since October 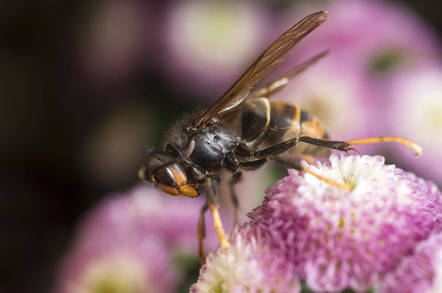 British honeybees can sleep safely in their hives tonight. The UK Department for Environment, Food & Rural Affairs has announced that the outbreak of Asian hornets in Blighty has been safely contained.

The winged critters were spotted in Tetbury this year, a small town within the picturesque Cotswold district last September, inciting fear that it could push Britain’s declining honeybee numbers down even further.

Although Asian hornets (Vespa velutina) are slightly smaller than their cousins, the Asian giant hornets – also known as the largest hornets in the world – they still pack a punch with their fearsome mandibles.

Asian hornets have inch-long stingers, but do not pose much of a threat to humans unless provoked. It’s the bees who have to keep a look out. They like to wait menacingly outside hives, before pouncing on their victims and decapitating them.

Two dead Asian hornets were seen in north Somerset, but no nests were discovered nearby. Since the National Bee Unit isolated the hornet nest from Gloucestershire, and treated it with pesticide, no live sightings of the creature have been reported.

The hornets probably made the short trip to the UK from France, where they have been breeding since 2004. The invasive species are also common across large areas of Europe.

Nests are founded when a pregnant female rapidly lays eggs, and can grow to an average size of 6,000 hornets. From a single nest, there are 350 potential queens that can go and start their own populations elsewhere.

It is unlikely that they will reappear over the next few months, as they normally begin to die out as winter temperatures kick in. But as the temperature begins to warm next summer, Defra has warned that the pesky beasts could make a comeback.

“We remain vigilant, however, and will continue to monitor the situation and encourage people to look out for any Asian hornet nests,” Nicola Spence, Defra deputy director for plant and bee health, said.

Defra advises people to stay away from Asian hornet nests and send an official report to the email address: alertnonnative@ceh.ac.uk.

Asian hornets can be identified by their dark brown or black velvety abdomens and bright yellow tipped legs. ®

Bees bring down US stealth fighter

Bee pheromone is similar to genes found in mammals