If plane came down fast and steep, might it have crashed to the North of the search zone? 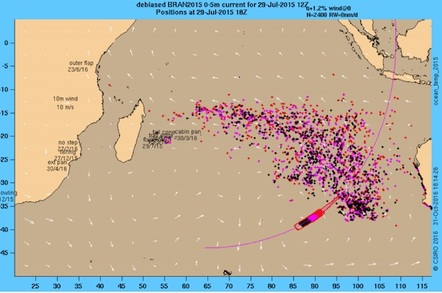 As we've previously reported, the MH 370 search area was chosen by analysing seven satellite handshakes. . The new analysis of the seventh handshake suggests the plane was experiencing “a high and increasing rate of descent”. That conclusion is based on analysis of “burst frequency offset” (BFO), which the report explains “is a function of the Doppler shifts imparted on the communication signal due to the motion of the satellite and the aircraft.”

Analysing BFO “can provide information about the relative motion between the satellite and the aircraft.” The report offers tremendous detail on BFO and how to use it in the case of MH370, and also reveals that the ATSB used BFO analysis to cook up new scenarios for Boeing to test in 777 simulators.

Those efforts suggest MH 370 was heading down, and quickly, when it made its seventh handshake. Which leads to the notion that a sharp, rapid, descent could have seen the plane hit the ocean to the north of the current search area which was defined on the basis of previous analyses suggesting slower descents.

Analysis of debris from the plane is also instructive, as it suggests the 777's flaps were retracted as is the case during normal flight. When the plane is landing the flaps are extended, so the finding of retracted flaps suggests MH370 was not being manoeuvred at low speed and therefore that flight crew were not attempting a soft landing on water.

Drift pattern analysis is also considered, with replica plane parts having been set adrift in the Indian Ocean to see where they end up. To date these efforts have been inconclusive as some analyses suggest that the debris originated to the North of the search zone, while others suggest a more northerly impact point is not feasible.

The ATSB has devoted three days to considering the report, an effort that will be closely watched by families of those aboard the fateful flight and the aviation industry as both have recently asked that the search for the plane be continued. The ATSB and authorities from Malaysia and China have previously said the search for the plane will be concluded once a survey of the currently-designated search area is complete. But if the new report turns up evidence suggesting the search zone should be expanded, it is possible the search will be extended.

The current search is nearly complete, with 110,000km2 of the 120,000km2 search zone already surveyed without success. ®