If you want to build code for lots of platforms, don't shoot the Message.io 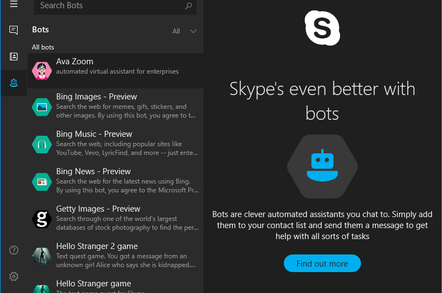 The 12-person company, based in Austin, Texas, aims to provide a single system for managing bot-based communication across multiple messaging services. Its bot syndication tool can take a chatbot designed for one of its supported services and make it available to users of other supported services.

"Our vision is for bots that work everywhere," said Tom Hadfield, CEO of Message.io, in a phone interview with The Register. "We believe all bots should work on all messaging platforms. The messaging platforms as they exist today are walled gardens. But if you look back through human history ... communication systems have trended toward interoperability."

Presently, Message.io works with HipChat, Microsoft Teams, Skype, and Slack, but the company plans to add support for Cisco Spark, Salesforce Chatter, and other messaging platforms – both consumer and enterprise – in the months ahead. The firm says it has signed up 80 bots for its private beta, with companies such as HubSpot, Kayak, Lucidchart, Nuzzle, and Poncho.

Bots – the chatting variety, as opposed to web crawlers and malicious automations – have attracted the attention of tech giants like Facebook and Microsoft because text-based interaction has come back into vogue.

Much of this interaction is happening through mobile messaging apps. And thanks to advances in speech recognition and natural language parsing, it has become relatively easy to convert spoken or typed phrases into the structured data necessary to interact with software.

For businesses, this means commerce can flow not only through website storefronts but through app-based conversational interaction with customers. Bots offer an opportunity to automate such revenue.

Bots also offer an alternative way to interact with enterprise applications, which (in the desktop world at least) have a reputation for clumsy interfaces and burdensome workflows.

"The reason we've decided to focus on the enterprise bot market is enterprise bots have higher rates of engagement and retention," explained Hadfield. "They offer real utility to employees. The messaging interface has become the quickest and easiest way to engage with enterprise software."

Hadfield says that enterprise chat apps don't rely on natural language processing as much as consumer chat apps because the focus isn't engagement. Employees tend to use slash commands to fetch sales figures or the status of customer support tickets.

"The messaging interface is becoming the operating system for the enterprise," Hadfield claimed, recalling Neal Stephenson's 1999 essay on software and interfaces, In the Beginning ... Was the Command Line.

For developers, cross-platform compatibility has obvious appeal: Creating a single bot and syndicating it with one click requires far less work than building and maintaining bots for dozens of different services.

Cross-platform development systems tend to be limiting because they typically support features common to their set of supported operating systems while ignoring features unique to a particular operating system. But Hadfield claims that among enterprise bot platforms, there's fairly broad feature parity. "The UI variations [among the platforms] are relatively minor," he said. "Almost every UI element on enterprise messaging platforms maps reasonably well."

There are edge cases, Hadfield acknowledges, pointing to Slack interactive messages as a feature that doesn't have a direct analog on other platforms. "Part of what we spent the year doing is finding ways to present those rare UI elements on other platforms that don't support them," he explained.

Bot developers interested in Message.io can apply for access through the company website. The service is free during private beta and when it launches next year, there will be paid premium services. The company is also planning to support consumer bot platforms like Facebook, Kik, and Telegram at a later date. ®