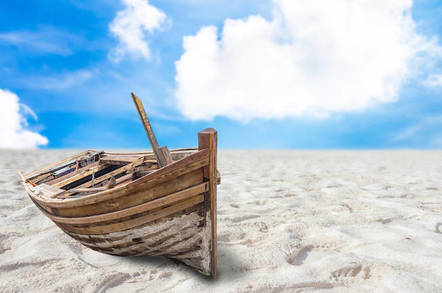 A biting shortage of NAND flash has upended the storage chip supply chain, forcing vendors to quote customers elongated lead times – in some extreme cases by more than four months.

Semiconductor marketplace DRAMeXchange warned weeks ago the component shortfall that surfaced in 2016's third quarter was likely to worsen in the final three months of the year. Orders from smartphone makers and SSD industries are fattened up, and the online souk's prediction appears correct.

Hewlett Packard Enterprise confirmed in a statement to The Register there are supply problems: “Industry-wide demand for NAND storage is at an all-time high with rapid growth from not only commercial IT products, but also consumer products such as mobile phones and cameras.

A HPE spokesman said it expected constraint to continue for the rest of this year, but in a note to customers – seen by us – the IT giant warned to expect shortages to "continue through Q1 2017 or longer."

In the missive, the enterprise vendor also admitted to an unspecified “technical issue” with HPE's Dual 8GB MicroSD kit for servers. One industry contact told us he’d been given a 104-day lead time for the product.

HPE's customer memo stated this issue could be resolved sooner rather than later, and the product “may begin shipping again before the end of the calendar year.”

Other major tech outfits also admitted the dearth of NAND storage had extended delivery dates. “There are extended lead times on any device using NAND flash, which includes SSDs. This is because NAND is also used in smartphone devices, which are seeing a growth surge,” a Cisco spokeswoman said.

She denied claims by our sources that Cisco servers were directly hit: “Cisco has not experienced any server availability impact due to SSD shortages.”

We asked a Dell distributor if it was experiencing any SSD-induced anguish, and we were told that as one of the biggest global purchasers of NAND flash, Dell was doing just fine, thanks.

A Dell spokesman told us he needed to speak to his marketing overlords in Austin, Texas, before commenting further. We'll update the story if the tech goliath gets back to us.

Others denied any knowledge of NAND storage shortages. Wilfredo Sotolongo, EMEA veep and GM for Lenovo’s data centre group, said the biz was seeing prices going up due to demand. “I am aware of price increases but I don’t see any shortages [impacting our portfolio],” he said.

In addition to NAND flash demand outstripping supply, one component distributor, who spoke to us on the condition of anonymity, said the manufacturing crossover from 2D planar NAND to 3D “has caused some problems.”

“Everyone [in vendor land] is short, some are worse than others,” he said. We'll have to wait until at least the end of March before components start to flow more freely again, he warned. ®

'Optional' is the new 'Full' in Windows 10: Microsoft mucks about with diagnostic slurpage levels for Fast Ring Insiders

That won't cause any confusion