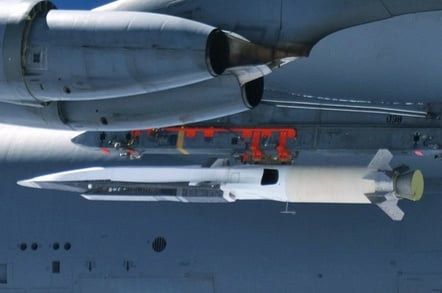 DARPA wants a hypersonic drone as a follow-up to the X-51, above

Raytheon has scored nearly US$175 million to work on DARPA's ongoing research into hypersonics.

This time, it's not about a hypersonic plane: the program that got its contract announcement on the United States Federal Business Opportunities register today is for a hypersonic weapons system.

HAWC – the Hypersonic Air-breathing Weapon Concept – is a joint project with the US Air Force to “develop and demonstrate critical technologies to enable an effective and affordable air-launched hypersonic cruise missile”, the DARPA project page says.

Raytheon's latest contract is for a scramjet HAWC, for which $3.4 million has already been committed.

Raytheon and Lockheed Martin are both working on HAWC projects – the latter was awarded a $171 million contract for a scramjet version, and a further $147 million for a “boost-glide” version.

Boost-glide hypersonic flight uses a re-entry vehicle to carry the hypersonic aircraft to the edge of the atmosphere.

Hypersonic work has had a mixed history at DARPA. Its HTV-2 hypersonic glider blew up in 2011 and crashed into the Pacific Ocean, in what was deemed a successful test. The unit that came to pieces in 2012 lasted longer than its predecessor, in 2010, which went out of control pretty much as soon as it hit the atmosphere.

Also on the list is development work for the XS-1 spaceplane, which DARPA wants to hoist payloads to the edge of the atmosphere before it glides back to Earth.

There's also the X-51 project, which achieved a Mach-5 flight in 2013 – after three previous failures. ®