Self-driving cars doomed to be bullied by pedestrians 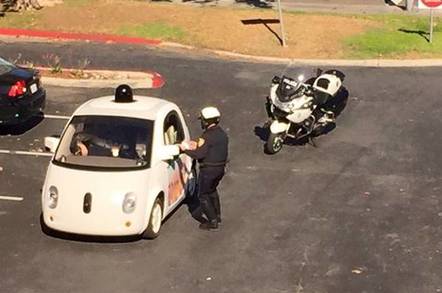 Self-driving cars get pitched as a way to reduce traffic fatalities, but safety may limit their appeal.

In a paper published on Wednesday in the Journal of Planning Education and Research, Adam Millard-Ball, an assistant professor in the Environmental Studies Department at the University of California, Santa Cruz, argues that the increased adoption of autonomous vehicles may make them less desirable in urban environments than human-driven cars.

The reason is that pedestrians know their fellow humans may run them over. So they act accordingly – as if their lives depended on not wading heedlessly into onrushing traffic. They also know that automated vehicles will defer to them, or they will discover as much when they interact with them.

Millard-Ball contends that pedestrians and drivers are engaged in a game of chicken, in which one party eventually decides to yield to the other based on the psychological perception of risk.

With a human behind the wheel, there's always a chance the driver will behave unpredictably or won't see the pedestrian.

Automated cars, however, are programmed to be perceptive, predictable and law abiding. So pedestrians will be able to take advantage of that tendency toward deference. If they do so, it could make traveling in a self-driving car exceedingly slow.

"Secure in the knowledge that a car will yield, pedestrians can cross with impunity," Millard-Ball wrote. "They merely need to act unpredictably or step into the street to force the risk-averse car to slow down. From the point of view of a passenger in an automated car, it would be like driving down a street filled with unaccompanied five-year-old children."

Other researchers have recognized the problem. As Donald Norman, director of the Design Lab at the University of California, San Diego, told The New York Times in 2015, "The real problem is that the [self-driving] car is too safe."

That's not to say self-driving cars won't be programmed to kill people in certain circumstances. Christoph von Hugo, Mercedes' manager of driver assistance systems and active safety, recently told Car & Driver that its self-driving vehicles will prioritize the safety of passengers over the safety of pedestrians.

However, Millard-Ball expects such scenarios will be uncommon. "I think that's a very special situation," said he in a phone interview with The Register. "I think it's going to be pretty rare where the car has to choose between seriously injuring its occupants and killing someone else."

Millard-Ball said there's been a lot of focus on the technology behind automated vehicles. He argues that more attention should be paid to how the adoption of self-driving cars affects people's incentives and behavior. "Once you get to a point where there are enough self-driving cars on the street, it becomes worthwhile to assert your right of way," he said.

Not everyone, of course, will dash into the street to stop traffic. "Some people will let autonomous vehicles through, but other people...may assert their legal rights," said Millard-Ball. "It doesn't mean self-driving cars won't be viable in urban areas. It will just be slower for them. The tradeoff is it will be a more attractive experience for pedestrians."

Until they get mowed down by an automated Mercedes. ®