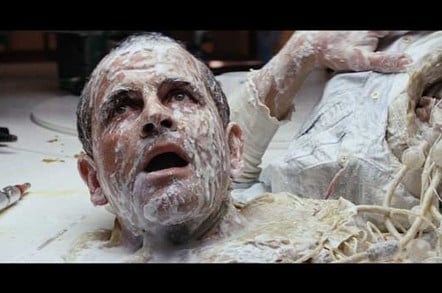 As any followers of the “Tabbi's Star” controversy will tell you, put “aliens” in a media release and you're bound to get the clicks.

So it was over the weekend when the Publications of the Astronomical Society of the Pacific accepted a paper claiming to have identified 234 stars out of a couple of million whose signatures show “periodic spectral modulations”.

Even before the latest “we've found aliens” story hit, the UC Berkeley SETI Research Center had expressed reservations about the claims made in this paper, Discovery of peculiar periodic spectral modulations in a small fraction of solar type stars, by Canadians Ermanno Borra and Eric Trottier of Laval University in Quebec.

We'll get to the science in a minute, but The Register would like to make its own observation first.

If one star was apparently sending a meaningful message we could observe on Earth, even we might consider it sensational.

But coincidences in science raise red flags, and the absolutely thundering coincidence of hundreds of civilisations, independently working out the same communications technology at different times, so that hundreds of signals happen to arrive at Earth all at the same time?

I'd bet a supercomputer would still be working out the odds against that happening by the time the Sun became a red giant.

Because the story took off in a variety of outlets – we're particularly tickled that it got Queensland's Chinchilla News a spot on Google News – El Reg decided to take a look.

Most ET scans look for radio signals. Back in 2012, Borra proposed a different model for communicating over the hyper-long distances involved: an alien civilisation trying to “say hello” could instead fire lasers – big lasers – in a way that inserted unnatural signals into the spectrum of the star they call home.

The detected signals have exactly the shape of an ETI signal predicted in the previous publication and are therefore in agreement with this hypothesis. The fact that they are only found in a very small fraction of stars within a narrow spectral range centred near the spectral type of the sun is also in agreement with the ETI hypothesis. However, at this stage, this hypothesis needs to be confirmed with further work. Although unlikely, there is also a possibility that the signals are due to highly peculiar chemical compositions in a small fraction of galactic halo stars.

In other words: instead of firing a laser big enough to be seen at interstellar distances, use a much smaller laser to insert a modulated signal on the huge light output coming from a star.

Why it's probably not aliens

A good starting point is what the SETI Research Center said even before Borra's publication hit the headlines. It's in this October 11 letter, here.

The SETI Research Center is uncomfortable that the work was conducted by one pair of researchers using one instrument. It prefers independent surveys, and multiple instruments to reduce the risk of instrument artefacts spoiling the data:

“Data artefacts, fringing, and inconsistencies in the manufacture of detectors are known to users of high resolution spectrographs to cause minute patterns to appear in the resulting spectra. The movement of the telescope, variations in observing conditions, and the process of wavelength calibration can easily introduce undesired signals at levels that are only barely detectable.”

Because of what it sees as the flaws in the Borra paper, the SETI Research Center says the result is at best “insignificant”.

At best, something seen by one telescope – the low-resolution spectrograph on SDSS – needs to be confirmed by more sensitive instruments that could see stronger variations.

El Reg also asked Australian National University astroboffin Dr Brad Tucker for his thoughts. He noted that the Borra paper too easily dismisses non-SETI hypotheses for what might cause the spectral modulations.

“There are lots of possible sources of stellar variation in G-stars” – like the Sun – and “Asteroseismology is a big field, especially now with Kepler. We can detect regular pulsations, and regular frequencies in a wide range of stars”, Tucker write.

Tucker added that astronomers regularly have to deal with a host of instrument problems: CCDs can produce short, periodic variations; and instrument calibration can affect both observations and the outcome of the data reduction that's routine in such work.

Other researchers are, we imagine, hard at work either confirming or debunking the result. ®