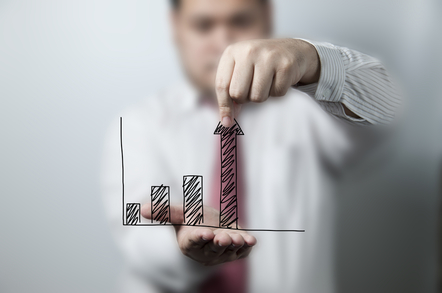 Life is to get a lot more expensive for Microsoft customers from the start of next year with currency linked, double-digit price hikes looming for cloud and on-premise software.

Software resellers, integrators and cloud service providers were warned about the price rises late on Friday afternoon and told us they expected a stampede of orders as businesses bring forward orders to avoid the rises.

“Microsoft is announcing British pound changes to harmonise its prices for enterprise software and cloud services within the EU/ European Free Trade Agreement region,” Microsoft stated in its comms to channel types.

Redmond reassured punters that they're still well off: "Even after this adjustment, customers across the region buying in British pound will still find our cloud offerings highly competitive."

Microsoft said “sustained currency changes” had led to “price misalignment” of the Brit pound, “this [price] change is an outcome of this periodic assessment and will realign British pound prices close to euro levels”.

Customers may remember that in 2012 Microsoft aligned pricing for most EU customers to the euro, which led to some price rises for users in the UK. But in the last year, the UK pound has slumped in value.

Suppliers told us they could understand the excuse reasons Microsoft had used for the rises, but were unable to explain the differential between the cloud and on-premise increases and some didn’t buy Microsoft’s excuses.

The “unified price adjustment” applies to new orders from commercial, public sector and academic customers, or for any business or institution renewing a volume license arrangement.

Mid-term volume licensing customers will get price protection on previously ordered software products, Microsoft confirmed in its document. And existing annuity Volume Licensing Agreements with price protection are not impacted, neither are prices for consumer, cloud, or OEM software which are “adjusted through different mechanisms and cadence”.

Microsoft might be trying to prevent licensing solution providers - enterprise licensing sellers - from moving deals from Europe to the UK to take advantage of local pricing.

“The mystery is the price difference in pricing increases [for cloud and on-premise]. The justification was rubbish. Basically it is claiming the cost for running cloud is a direct hit. No real cost for paper-based licensing,” one Microsoft supplier told The Reg.

“Lot of deals will be brought to the UK for December from US Dollar and Euro countries. It could give Microsoft a pop in results, but from January everyone on Office 365 who pays via a Cloud Service Provider Agreement take a hit.”

Microsoft has told us it has no further statement. ®

Pop quiz: you're hosting your first tech conference and a pandemic is declared. What do you do?