US docs halve screen time for tots: No more than an hour a day 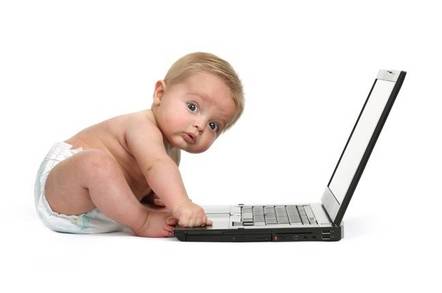 The American Academy of Pediatrics has changed its recommendations for children's use of electronic media, and has cut the overall time it recommends that tots spend on-screen.

For the past 17 years, the influential group has recommended a blanket ban on digital media viewing until the age of two, and then allowing two hours a day for the next three years. It has now cut that to one hour of "high-quality programs" a day, and added that supervised video chat with a parent can be useful from 18 months.

"What's most important is that parents be their child's 'media mentor,'" said Dr Jenny Radesky, lead author of the AAP policy statement. "That means teaching them how to use it as a tool to create, connect and learn."

Numerous studies by the AAP have shown that very young children see little educational benefit just watching a 2D world on digital media, compared to 3D play where they can learn tactile skills and how things, people, and animals interact.

Children under two can get increased vocabulary from video chatting with someone, the group found, but only if a parent or other caregiver repeats and reinforces the words.

Kids over two years old can learn some vocabulary by themselves, although it's always better to have an adult around to guide and reinforce lessons, the AAP said. The overall quality of educational apps is very poor, although the professional body did recommend the Sesame Workshop and the Public Broadcasting Service (PBS).

Over the age of six, parents should set strict time limits on viewing time, set media-free time, and provide good examples by not spending too much time gazing at screens in front of their offspring.

"Parents play an important role in helping children and teens navigate media, which can have both positive and negative effects," said Megan Moreno, lead author of the policy statement on media use in school-aged children and teens.

"Parents can set expectations and boundaries to make sure their children's media experience is a positive one. The key is mindful use of media within a family."

The AAP notes that it's not just mental growth that's an issue with digital media. There is a noticeable up-tick in obesity with every hour a child spends on-screen, as well as an increased likelihood of interrupted sleep patterns and poor impulse control in later years. ®

We pay for the hosting so the big G stays: Open-source community-driven code lingo site must sport giant's brand