Lessons from the Mini: Before revamping or rebooting anything, please read this

How not to throw the baby out with the bathwater 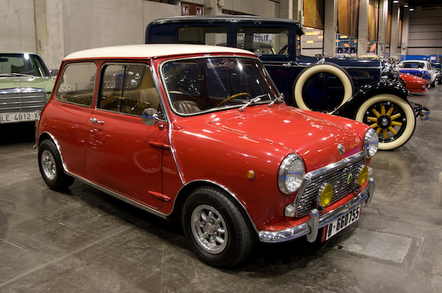 If you're considering doing a relaunch, a "reboot", or a revamp of any kind, there's a lot to learn from the story of the Mini.

The original Mini had been in production for 41 years by October 2000, when the last one rolled off the line at Longbridge – but the design had never really been updated. For the last two decades of its life, only a few thousand boutique models had been sold each year. The owners, BMW, had an iconic and internationally recognisable brand on their hands, but a design that needed an overhaul. In 1998, the redesigned VM Beetle had shown that the market liked a small city car with some character.

After collecting some 15 designs, BMW gave the job to BMW designer Frank Stephenson, who modernised the Mini without losing its essential character. So how did he manage it?

We’re grateful to Dave Birss for the explanation.

Because the Mini had gone unchanged since the 1960s, Stephenson incrementally modernised it for each decade, imagining how it might have evolved. "He took it back to the Mini of the 1970s, then the 1980s, then the 1990s and then the 2000s."

Stephenson retained two things that every successful makeover needs to honour. One is the visual or sensory difference that defines a product. Harley Davidson tried to trademark their distinctive sound, for example, because you can hear a Harley coming long before you see it (they were unsuccessful).

The second is what you might call the soul or "meaning" of a product, of what makes it different. If strategy was left to PR companies and demographic-hunting marketing gurus, everything would look the same. Corporate mission statements are largely identical, too. But long-lived products do have a particular place in people's affections. The recent Marmite scare reminds us how much.

Stephenson observed that "the Mini was designed in layers like a burger: the roof, the windows... none of the elements overlap". That layered design was retained as was the "childlike face, the frog-like smile". Inside, the huge circular speedometer is a nod to the original. BMW ensured that while the Mini was bigger than Alec Issigonis' original, it was very responsive, and fun to drive.

Too often revamps or "reboots" are commissioned to chase a new demographic. The owners of the brand have lost confidence, or forgotten why it's there. Sometimes the owners of a faded brand are embarrassed by it, so wish it was something else. Almost always they fail.

"It's useful advice for anyone doing a redesign. Don't fuck with what's noticeable or the ethos of the product," Birss points out.

Birss was speaking at the OX Summit last week in Frankfurt, and while you'd normally run a mile from an innovation consultant, Dave is a handy antidote. For example, his big beef is with the "disruption" shysters, which he calls "an echo chamber myth". Most innovation is incremental, not disruptive, he points out. Companies just throw the baby out with the bathwater.

Stephenson moved onto redesign the Fiat 500 – which to me looks like an old Fiat 500 in a fat suit (think Eddie Murphy as the Nutty Professor) – and Ferrari. He didn't think much of what BMW subsequently did with his revamp comparing it to a small SUV.

Updated Unpopular opinion: Adverts are a bit more distinct with this new style, but OK, internet, you win