SimpliVity sheds staff, rattles tin for another $100m from investors 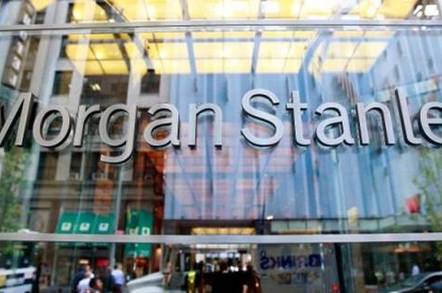 +Comment Hyper-converged infrastructure appliance vendor SimpliVity is working with Morgan Stanley to get more private funding and to launch an IPO possibly in 2017. It has also laid people off.

SimpliVity has been making cuts while looking for $100m in extra cash, a source familiar with the matter has told The Register. We have seen an internal Morgan Stanley memo that confirms the numbers involved. The email states that SimpliVity booked more than $95m in sales in its 2016 financial year, double that from the previous 12 months. The company was founded in 2009 and launched its first product in 2012.

Crucially though, the memo suggests that, despite Morgan Stanley's efforts this year to secure new private funding for the business, SimpliVity has been unable to win over any new investors – its last funding round was announced in March 2015.

One well-placed source warned more people could be "laid off from Simplivity if they keep failing to find new funding."

Commenting on the layoffs, SimpliVity CEO Doron Kempel told us on Wednesday: "We need to ensure execution excellence by hiring, training and repositioning the right people. Sometimes that requires programmatic action. It's part of business, and not a result of 'shrinkage'."

We understand some staff were let go a little earlier this year. Kempel insisted there have been no changes to headcount since roughly the start of September, though.

"We are continuing to hire aggressively, and you can check out our website to that extent," he added. "We continue to hire, mainly in engineering and sales, including in Europe. We intend to load-balance and tune as a matter of standard, and efficiency." 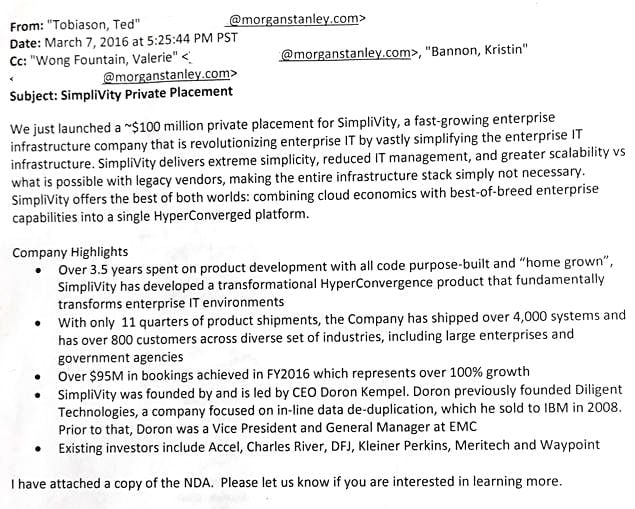 "Results in first half [of 2016] aligned with our plan, with software sales accelerating faster than anticipated. This is positive since our margin on software sales is naturally higher than on appliances where we sell servers as well.

"We believe that this is the right business model for a vendor that does not own x86 servers, and it offers great commercial differentiation, since the end user determines which x86 servers to run on."

SimpliVity's latest quarter is continuing that momentum, we're told: "I estimate software sales to exceed 65 per cent this quarter. This is very positive, well ahead of our plans, and is testament to the end user appetite to separate the software from the server from the purchasing standpoint."

The Massachusetts-based biz has partnership news coming and is "working on certification of another brand of server vendor which will enhance access to market, but we'd prefer not to share names right now."

Regarding funding, it is "indeed working with Morgan Stanley, from here through IPO," said Kempel.

"As you know, the markets have been hesitant towards IPOs up until recently, and as byproduct, such hesitation permeated onto the private capital markets," he said. "Fortunately, we have excellent investors and the financial latitude to forego fundraising at sub-optimal time. The market is now reenergized and we will consider our next steps accordingly."

Kempel claims SimpliVity has an advantage: "The market is maturing and becoming more aware of classification: not all hyper-converged infrastructure technologies are created equal. Only SimpliVity can address the most mission-critical applications – think of the global top 50 financial services company that runs three data centers with all workloads on SimpliVity."

El Reg thinks the competition in the hyper-converged area is at a very high level – a white hot, previously unseen level – with Nutanix wanting to prove itself post-IPO, Dell-EMC-VMware throwing everything at gaining the number one position, Cisco punting HyperFlex vigorously, and HPE pushing its products too. Then there are Lenovo, HyperGrid and others, all wanting a piece of the fastest-growing sector of the on-premises storage market. Not everyone is going to survive.

Kempel claims: "Our win ratio against all the competitors that you outlined is around 80 per cent. We have seen excessive discounting by most, typically after being notified by end users that SimpliVity is chosen. However, as you know, it is difficult to discount consistently against a vendor – SimpliVity in this case – that offers software. The end user buys the x86 server from the server vendor directly."

All-flash hyper-converged infrastructure appliances are coming, adding to the company's development and go-to-market costs. That means more funding is an attractive idea to explore. Judging from Kempel's boasts about SimpliVity's growth rate, an IPO is feasible. ®