STARTLE'd code to make decisions from waves of information 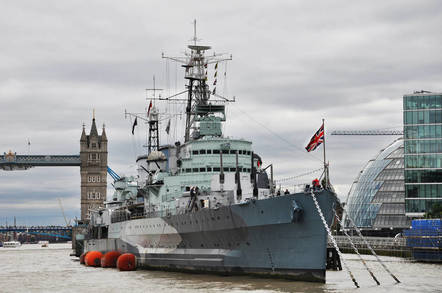 The Royal Navy is planning to step up its use of AI to improve maritime defence, beginning with STARTLE, which is AI software that can can spot potential threats.

At a briefing titled "Artificial Intelligence in Royal Navy Warships" hosted by non-profit TechUK, Blighty's navy announced it was keen to explore the potential of using machine-learning to improve operational capability in its fighting units under Project NELSON.

Developed by Roke Manor Research, the company claims it is the first supplier to integrate AI software into a Defence Science and Technology Laboratory-sponsored maritime combat system demonstrator.

Mike Hook, lead software architect on STARTLE at Roke, told The Register: “It’s hard to implement new technology in warships because it has so much proprietary software. But integrating STARTLE will give it new data to do trials with.”

Roke describes STARTLE as “machine situation awareness” software. It works by using a neural network and machine learning to process information and flag warning signs in a similar way to the fear condition system found in mammalian brains.

It resembles how the amygdala – a set of neurons located within the brain’s temporal lobes – reacts towards sensory data to learn about danger, Hook explained.

“It roots through big fat piles of data and has been trained to recognize threats. It’s a goal-driven threat accessor. It monitors multiple sources of information and has a queuing system build up a body of information to assess and confirm potential threats by going through a series of criteria like a human would do,” Hook said.

The software explicitly logs its decisions. which makes the system more transparent, and decisions are ultimately signed off by humans. It is expected to assist the Principal Warfare Officer, Roke said.

Transparency and validation were two issues in AI highlighted by the Science and Technology Committee’s Robotics and AI [PDF] report released last week.

Hook doesn’t see the software as being problematic. “It’s a kind of augmented intelligence that can cope with much more complex situations to help inform human decision making.”

The potential of AI is slowly encroaching the defense industry. The Royal Navy said the ultimate goal was to develop an AI system called “Mind,” which will be able to process information for navigation, logistics, medical, engineering and cyber defense operations.

“The Royal Navy (RN) aspires to use AI technology to develop an RN-owned Ship’s ‘Mind’ at the centre of its warships to enable rapid decision-making in complex, fast-moving war-fighting scenarios,” it said in the briefing information for the event.

“I believe that AI – like all areas of computer science – is a technology that can help you deal with complexity better. AI is a step further, and allows machines and humans to work together as a team,” Hook told The Register. ®