NFL is No Fondleslab League: Top coach says he'd rather use pen and paper than Surface tab 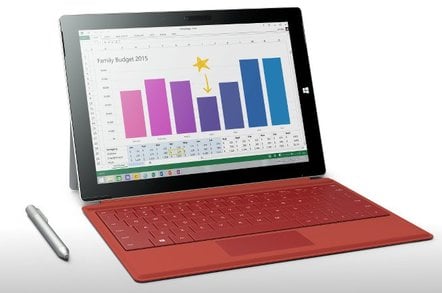 Microsoft's multi-year deal with the National Football League has lost some of its luster after one of the game's top coaches says he would rather use paper printouts than rely on the Surface Tablet.

Speaking at his weekly press conference, New England Patriots head coach and general manager Bill Belichick says he is tired of the unreliability of the tablets the league has put on every sideline thanks to a $400m sponsorship deal from Microsoft. Redmond, basically, shelled out hundreds of millions of dollars to give teams Surface slabs to make the hardware look cool.

"As you probably noticed, I'm done with the tablets. I've given them as much time as I can give them," the six-time Super Bowl winning coach said.

"They're just too undependable for me. I'm going to stick with pictures, as several of our other coaches do as well, because there just isn't enough consistency in the performance of the tablets, so I just can't take it anymore."

Belichick goes on to note that because the league manages the tablets (which sit on Microsoft-branded carts during game days) the team's own IT department is unable to troubleshoot any problems with the hardware during the week and the coaches only get access to the tablets "a few hours" before game time.

"I'll use the paper pictures from here on because I've given it my best shot," the coach said. "I've tried to work through the process but it just doesn't work for me and that's because there's no consistency to it."

This isn't the first time Microsoft's Surface marketing campaign with the NFL has backfired for Redmond. In 2014, NFL analysts stumbled through an awkward period of constantly referring to the then-new Surface sideline tablets as "iPads."

That same year, CNN news anchors were spotted using the Surface tablets on their desks as iPad stands. ®