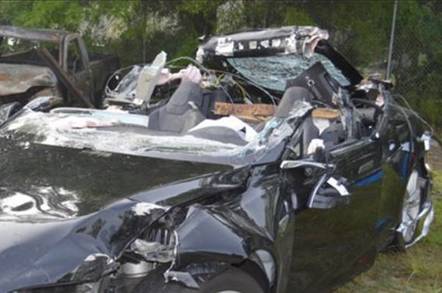 Germany's transport ministry has warned Tesla not to call its driver assist system “Autopilot” within the Bundesrepublik.

Tabloid Bild am Sontag (Picture on Sunday) says the country's Motor Transport Authority has notified Elon's electrics of the decision, saying the term “autopilot” is misleading.

Autopilot has had a bad 2016: in May a speeding Model S went under a truck, killing the driver, Joshua Brown. Then in September Tesla responded to mounting criticism about Autopilot by releasing an over-the-air update to improve its 3D model of the car's surroundings. The update also adds more warnings to Autopilot if drivers aren't paying attention, and if they don't respond, the fancy cruise control is switched off.

Autopilot's troubles let to a bitter spat with Tesla supplier Mobileye, which boiled over in September when the former sensor supplier accused Tesla of “pushing the envelope in terms of safety”.

Tela boss Elon Musk, meanwhile, has postponed the launch of a new product. It's widely felt the new product is Autopilot 2.0. Or whatever the company is allowed to call it in Germany.

Moving the Tesla announcement to Wednesday. Needs a few more days of refinement.