Footage uploads to Axon cloud for use as evidence 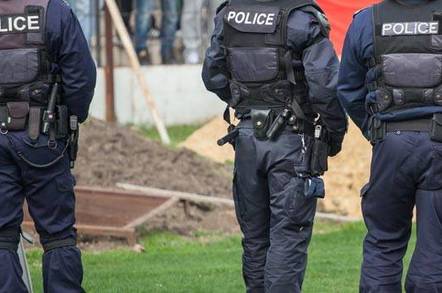 The Metropolitan Police Service has on Monday begun to roll out the 22,000 body-worn video cameras its cops will be using to record their interactions with denizens of the British capital.

Introducing the rollout, the Met's Commissioner, Sir Bernard Hogan-Howe, said: "Video captures events in a way that can't be represented on paper in the same detail, a picture paints a thousand words, and it has been shown the mere presence of this type of video can often defuse potentially violent situations without the need for force to be used."

The body-worn video (BWV) cameras will not record all of the cops' activities, but will be turned on at the officers' discretion. While this is proposed to itself avoid “unnecessarily impeding” the public, presumably on privacy grounds, research has suggested that when the police are allowed to choose when to begin recording, they are more likely to be assaulted, and the number of incidents involving the use of force actually rises — by 71 per cent.

Those findings were reported last year across two publications: the European Journal of Criminology and the Journal of Experimental Criminology, and used research led by the University of Cambridge's Institute of Criminology.

“If an officer decides to announce mid-interaction they are beginning to film, for example, that could provoke a reaction that results in a use of force,” according to Cambridge criminologist and the paper's lead author Dr Barak Ariel. “Our data suggests this could be what is driving the results.”

The footage recorded on the camera is automatically uploaded to the Axon-provided cloud once the device has been docked, and there it is either flagged as being required for use as evidence in court or for other proceedings. Video that is not retained as evidence or for a policing purpose is automatically deleted within 31 days.

Last year, The Register revealed how the Met began to procure the cameras following the fatal shooting of Mark Duggan as part of its ambition “to become the most transparent police in the world,” according to Stephen Deakin, then the interim chief technology officer at the Met, who told us that the force was “accelerating the procurement process at the request of the Commissioner and Deputy Mayor.”

As of Monday, the Met has begun to deploy the 22,000 cameras it procured from Axon Public Safety UK, on a three-year contract worth £3.4 million — with the option to extend for a further three years to a maximum value of £6.9 million.

A year-long study, again conducted by a team led by the University of Cambridge's Institute of Criminology, found that the use of body-worn video cameras resulted in a 93 per cent drop in complaints made against the police — likely because both cops and robbers behaved better when they were recording.

BWVs will be issued to all 32 London boroughs, as well as a number of frontline specialist roles including firearms officers. The Met has stated how trials of the cameras have “proved particularly successful in domestic abuse cases where there has been an increase in earlier guilty pleas from offenders who know their actions have been recorded.”

The technology offers greater transparency for those in front of the camera as well as behind it. Londoners can feel reassured during their interactions with the police, whilst allowing us to demonstrate the professionalism of our officers in the many challenging and contentious interactions, such as the use of stop and search.

The rapid adoption of body-cams by Blighty's bobbies means as many as 59,000 will be in use by the end of 2016/17, according to the chair of the police user group, Stephen Goodier, who added that forces are exploring cloud storage options to hold the digital evidence. “BWV is just one form of digital evidence," he said. "Our infrastructure needs to support everything else: Automatic Number Plate Recognition data, police and local authority access to CCTV, and 999 calls.”

Mayor of London Sadiq Khan said: "BWV is a huge step forward in bringing our capital's police force into the 21st century and encouraging trust and confidence in community policing. This technology is already helping drive down complaints against officers and making them more accountable, as well as helping to gather better evidence for swifter justice.” ®