Space is big. Really big. You just won't believe how vastly hugely mindbogglingly big it is 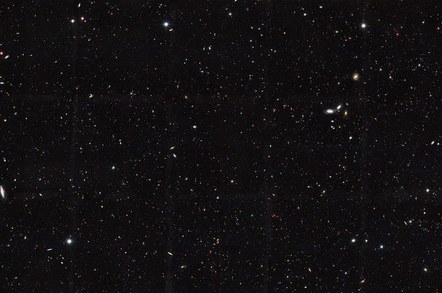 Douglas Adams was right. Space is really big. New analysis of data from the Hubble Space Telescope and other observatories suggests there are ten times more galaxies out there than previously thought.

The theory is advanced in a paper (PDF) titled “The Evolution of Galaxy Number Density at Z < 8 and its implications” that Hubble's overseers have helpfully explained saw a team led by Christopher Conselice of the University of Nottingham pore over images from the Space Telescope and other sources. The astroboffins' investigation saw them convert old Hubble snaps into 3D “in order to make accurate measurements of the number of galaxies at different epochs in the universe's history.”

The team also “... used new mathematical models, which allowed them to infer the existence of galaxies that the current generation of telescopes cannot observe. This led to the surprising conclusion that in order for the numbers of galaxies we now see and their masses to add up, there must be a further 90 percent of galaxies in the observable universe that are too faint and too far away to be seen with present-day telescopes.”

So why can't we see them? They're so far off and there's so much light-absorbing stuff between us and them that they're very faint, certainly too faint for the wavelengths of light that people can see. But a more sensitive telescope would be able to spot them.

As luck will have it, humanity is working on just such a 'scope. The James Webb Space Telescope's primary mirrors will have a diameter of 6.5 meters, dwarfing Hubble's 2.4m. The new 'scope will also do its work at the L2 point way out past the orbit of the moon, a far better spot than Hubble's orbit, which is just 570km from Earth. The Webb 'scope will also include shields that block light and make it a better observer of infrared light.

Conselice says it's therefore hoped the Webb 'scope will make it possible to peer at the galaxies that his team's studies infer.

And as it happens NASA just yesterday releases a video of the new telescope being readied for testing. It's due to launch in October 2018. ®