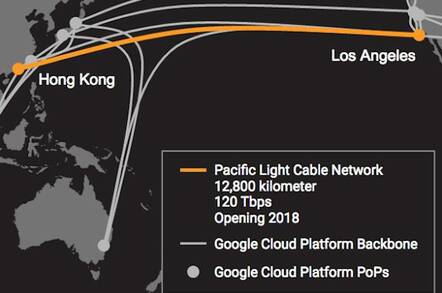 Mere months after its first trans-Pacific cable venture lit up, Google has announced it's friended Facebook as part of another cable consortium.

While there are several cables connecting Hong Kong to the US, all of them pass through several landing stations on the way, and none have the claimed 120 Tbps design capacity of the 12,800 km PLCN.

The cable was first announced in November, 2015 by the low-profile PLDC and TE SubCom.

When PLDC and TE SubCom first revealed the planned build, they predicted a US$400 million cost, according to TeleGeography.

At that time, PLDC expected to own the cable outright, and intended to begin construction in June or July 2016, so signing the two US tech giants as partners seems to represent a change of strategy.

While the build seems to be running behind its original commencement schedule, the partners expect the cable to carry its first signals in 2018.

The cable will have five fibre pairs, and its direct US-to-Hong Kong route means it will have lower latency than other networks.

Google's FASTER cable was lit in June of this year, and connects the US to two locations in Japan. ®