They're all simulated – but the drones aren't 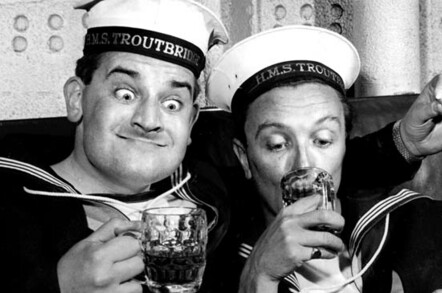 Featuring about 40 autonomous systems – mostly seaborne, though including a handful of aerial vehicles as well – the exercise is partially running alongside the main Joint Warrior tri-Service exercise.

The Unmanned Warrior exercise itself is part technology proof-of-concept demonstration, part sales pitch. The RN is keen to buy more robotic tech as manpower shortages within the fleet continue to keep warships alongside instead of at sea, while the government – and the MoD in particular – is keen to spur on the domestic drone industry.

“What we are seeking to achieve is an event that re-shapes the market to provide new opportunities for everybody, and capability transformation for the Navy,” said Commander Peter Pipkin RN, who rejoices in the job title of Fleet Robotics Officer.

Hence Unmanned Warrior. One of the biggest areas of interest for the Navy is automated minesweeping: one task during the exercise sees the Royal Navy's minesweeping ships clear a simulated minefield. The roboats then carry out the same task, with human observers at sea and on shore taking notes on time taken and effectiveness.

Other notable robotic participants in Unmanned Warrior include a self-flying helicopter from Leonardo, nee Westland...

… the Boeing ScanEagle drone, which, despite much success on operational deployments was withdrawn from RN frigates earlier this year, allegedly because of budget constraints …

… and the US Navy, which sent a team from the Office of Naval Research along to see what those pesky Limeys had dreamed up. Unlike their British counterparts, the USN has published some neat little posters about what the different exercises within Unmanned Warrior are seeking to test, drone-wise, including: anti-submarine warfare; minesweeping; intelligence, surveillance, targeting and reconnaissance; and command and control. They can all be downloaded from the USN website. ®

The RN PR team also made a video about Unmanned Warrior, and it's below.