'Molybdenum disulphide' valley has a nice ring to it, no? 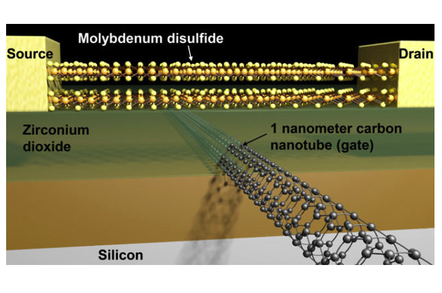 As explained in their Science paper MoS2 transistors with 1-nanometer gate lengths, the authors explain silicon is a lovely substance with which to make transistors provided you don't want them much smaller than 20 nanometres. But if you go smaller, “Scaling of silicon transistors is predicted to fail below 5-nanometre (nm) gate lengths because of severe short channel effects.”

The boffins explain to Berkeley Lab that when you build transistors smaller than 5nm “a quantum mechanical phenomenon called tunnelling kicks in, and the gate barrier is no longer able to keep the electrons from barging through from the source to the drain terminals.”

That means the transistor is always on and the semi part of semiconductor is lost. That all 1, no 0, state is zero use to those building classical computers.

Enter Molybdenum disulphide - MoS2 – in which electrons are “heavier” and therefore able to be controlled on shorter gates. The paper also explains that MoS2 can be manufactured in sheets 0.65 nanometres thick and also offers “a lower dielectric constant, a measure reflecting the ability of a material to store energy in an electric field.”

“Both of these properties, in addition to the mass of the electron, help improve the control of the flow of current inside the transistor when the gate length is reduced to 1 nanometre.”

The gate itself is a carbon nanotube at an even smaller scale.

For now, the boffins are chuffed at their demonstration but warn they're still a long way short of building whole chips using this technique. But they're also optimistic that MoS2 offers a viable way to keep classical computers scaling down, which could mean a bit more life for Gordon Moore's prediction of rapid increase in transistor density.

And possibly a new name for San Francisco's exurbs: “Molybdenum disulphide valley”, anyone? ®

Move over One-Click shopping, Click to Pray is here

At least no one had much use for the metal monstrosity

Is the data stored in the cloud … where God lives?