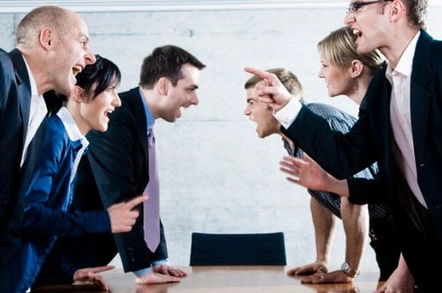 Images Communication has now become so difficult at meetings of the UK Government Digital Service's (GDS) Platform-as-a-Service team, they've been forced to implement hand signals to prevent the "less dominant or newer members of the group" from being shouted down.

In a blog post today by Dan Carley, GDS explained how it has established a set of six hand signals to prevent "passionate" members of the team making the meetings "chaotic, unfocused and frustrating."

The Global Language monitor estimates there to be more than a million words in the English language, which, alongside intonation and context, offer an infinite combinations for nuanced and precise communications. Unfortunately, exploiting this near-infinite resource seems to be an impossibility at GDS.

"We’ve all been in group situations where the discussion is dominated by the most confident or the loudest people in the room," Carley stated, before explaining:

The less dominant or newer members of the group hesitate to voice their opinion. Others get distracted waiting for the right moment to jump in, only to find that when there is a chance to speak, the conversation has already moved on.

"Our stand-ups and larger team meetings were getting longer and communication was becoming harder," wrote Carley, and when one of the GDS team suggested using hand signals to communicate, the rest eagerly agreed.

According to Carley, GDS staffers "felt very self-conscious" during the first week of using the hand signals. "It does look a bit strange to outsiders," Carley added, before quoting GDS user researcher Will Myddelton: "It sounds weird, but when you see it in action it is strangely beautiful."

Hand signals are now used at GDS "on a daily basis in discussions involving more than three people" although not when GDS is entertaining visitors from outside the team "because it would be a bit like having a discussion in a different language in front of people who can’t speak it.

"For some," wrote Carley, "learning the signals can take time but using them soon becomes second nature. It takes discipline to make hand-signalling their default response and they have to remember which hand signals to use."

GDS hand signal for "You're the man" "Direct Response"

The flow of conversation has been improved at GDs thanks to the handy scheme. "Agreement or disagreement can be demonstrated without speaking," noted Carley. "Whoever is talking is free to finish without interruption, and gain feedback as they talk."

Although GDS hasn't managed to spend any less time in meetings, the team now has "more focused discussions" and Carley believes they "certainly get through more content. People can have a voice without worrying about when to jump in."

Using hand signals is just one way of communicating in groups which we’ve found to be effective. If you’re [sic] team adopts any other approaches, please share in the comments.

And with that in mind, El Reg would like to contribute its own two in-house hand signals. The first we use when discussing the woeful lack of strategy that accompanies the service's £450m budget wonderful efficiency of GDS and its staff's excellent sense of humour.

The Register's hand signal for "GDS"

The second hand signal becomes more frequent as the week goes on, and our desire to load-up stories with browser-murdering animated .gif files decreases.

The Register's hand signal for a good evening.