Don't panic, but a 'computer error' cut the brakes on a San Francisco bus this week 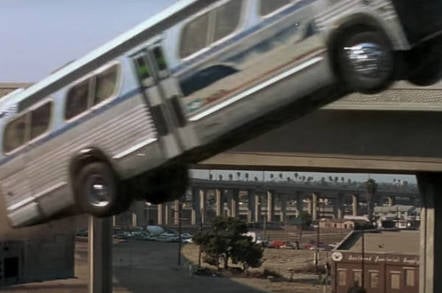 A trolley bus crash in San Francisco is being blamed on a "computer error" that left the vehicle without working brakes.

The San Francisco Examiner reports that a prang on Jackson and Scott streets Monday that sent the bus driver to the hospital was the result of a failure in the components that control the brake system.

The Examiner cites an internal report from the SF Municipal Transit Agency (MTA) that finds the electrical components linking the brake pedal and handbrake to the bus' motor failed. This, in turn, left both the foot and handbrakes on the bus non-functional.

The newspaper notes that the circuitry blamed for the brake failure is present in 273 of the roughly 800 buses that comprise Muni's San Francisco fleet. The memo says that SFMTA plans to keep those buses – all older models with more than a decade of use – in operation and a test has been devised to check for component failure that caused this week's crash.

MTA has also put out a set of steps that will allow bus drivers to manually shut down their buses should the brakes fail again. The Examiner notes that SFMTA has plans to replace all 273 of the old buses in question at the end of this year.

An SFMTA spokesperson insisted to The Register that the electric trolley busses are completely safe. "To be clear, these vehicles do have breakdown issues, but they do not pose a safety issue on San Francisco streets," the spokesperson said. "Every vehicle goes through routine maintenance and is checked every morning to ensure the vehicle is safe for operation. We only put vehicles on the street that are safe and meet all state requirements for Muni service." ®