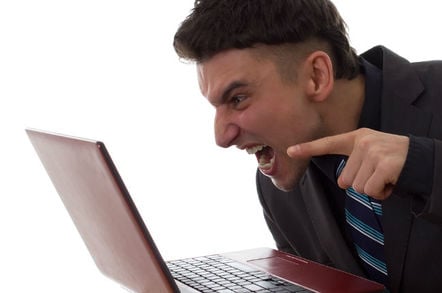 BT customers are unable to delete BT Yahoo email services - despite an exodus of users seeking to leave the security-challenged webmail biz.

Since allegations arose that Yahoo built an app to enable it to scan all of its users' emails at the request of US intelligence, many users have sought to delete their email accounts.

That was in addition to Yahoo!'s confession last month that hackers had stolen the credentials for at least 500 million of its customer email accounts.

BT had outsourced its webmail hosting to Yahoo - and has a total of 7 million accounts. BT had said a minority of its customer base had been affected by the breach, but declined to say how many.

One of customer got in touch to report that BT customers are currently being locked into their BT Yahoo email service.

A recent screengrab of a customer attempting to use this function seen by The Register reads: “Sorry the delete feature is currently unavailable. This feature will become available by the end of September."

The customer said BT/Yahoo! had also made it impossible for BT customers to configure the forwarding of emails to a third party address from their BT Yahoo addresses.

He said: "BT is being about as communicative as Trappist monks about this."

He added: "BT refuse to acknowledge any contractual responsibilities to customers with regard to email as they see email as a freebie add-on to the broadband service."

Other customers have also complained on BT's forum. One said: "Help! I have tried to delete email sub accounts but unable to do so. Any help and or advice will be greatly appreciated."

Another complained: "It's October BTYahoo get it sorted or did you mean September 2020?"

A BT spokesman told The Register: “We apologise to customers who have been unable to delete their Yahoo! account. We are working quickly to sort this out and expect to have this fixed soon.” ®