BOFH: The Idiot-ware Project and the Meaningless Acronym

We'll take you away from misery of Hell Desk 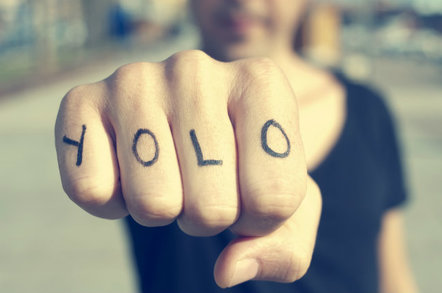 Episode 13 "So I just need a bit of help with the O.I.A.A.P." the new Boss blurts, bowling into Mission Control with a folder tucked under his arm.

"The Overarching Information And Architecture Project," the Boss says, too green to know whether our blank expressions are genuine or whether we're being obstructive.

"You know you're not suppose to capitalise the A in AND, don't you?" the PFY says, opting for obstructive. "It smacks of desperation. It should just be O.I.A.P."

"He was not!" the Boss says, not picking up the vibe of this conversation at all. "And I WILL not."

"I'm sorry," I say. "I think I may have temporarily lapsed into a coma - It's a medical condition. I have a note."

"The OVERARCHING INFORMATION AN.."

"And Overarching bit is a little redundant too isn't it?" The PFY chips in. "I mean you could just call it the I.A.P and it would still be the same thing."

"Just a quick slap," I urge the Boss. "Then really put the slipper in when he goes down. It's the only thing he understands."

The Boss, however, is maintaining his reserve.

There are five main exercises undertaken by managers who don't have the wherewithal to do their job but want to look like they're contributing:
A. A Review of "lessons from the past",
B. The big push for documentation,
C. An anal-gazing "Look-to-the-future" exercise,
D. Team building and/or Group Dynamics, or,
E. A comprehensive review of something to reach the conclusion they've already thought of.

So we're talking about C or E.

Either way, it's a black hole into which time and energy will be poured whereas the maximum workplace benefit would be derived from nailing the Boss into an airtight soundproof cupboard in the basement with an open drum of calcium chloride for several months.

It's a fairly transparent attempt to get rid of everything we have here that he doesn't understand and replace it with some lame version of the same thing which costs four times as much, does half the job but produces a nicely coloured pie graph. So we're probably talking E.

"I just need the Committee. I emailed everyone but only got one response."

And we all know who the one respondent was - a crawly sycophantic toerag from the Hell Desk who thinks he can suck his way to the top by agreeing with every inane thought which crosses the Boss' mind.

So it's Catch 22 - If providing input to this process is a drain on your time and will to live, being on the Committee is like being immersed in a jar of turd-scented treacle with a urinal drain as a snorkel. Which accounts for the lack of respondents.

"Anyway, I was wondering if one of you two would li.."

"YOU FAINTED!" I say, kindly, a couple of seconds later "AND HIT YOUR HEAD!"

"Yes!" the PFY says, hiding his throbbing hand behind his back. "Let us help you into a seat."

"YOU MISSED THE CHAIR!" I say, a couple of seconds even later, "AND BANGED YOUR HEAD ON THIS RUGGEDISED LAPTOP."

You only get a chance to use the old "master reset" on a Boss a couple of times in their career before the deja vu kicks in - and if you've got to play that card you may as well play it to get out of being on a Committee. Especially a committee like this one which a scope so open-ended it could see you through to retirement.

As it turns out while we dodged a bullet avoiding the committee we collected a 40 pound shell we got slapped onto the working party. Apparently the first thing the newly-formed two-man committee did was create a list of people who would be on the two-man "working group" - the PFY and myself.

So perhaps one too many master-resets after all.

Now the Committee of an infrastructure and architecture project has the dubious pleasure of scores of seemingly endless meetings to decide upon a project framework, project goals and project champions before getting down to the real nitty-gritty important stuff of deciding the font to use in the survey document, but the Working Group will be the people who'll actually administer the survey.

They'll talk to people individually, collate their responses, analyse those responses against the project framework and present the analysis to the committee so that it can be completely ignored when the Boss does everything he wanted to do in the first place but needed an investigation to support.

"...so to give you a bit of background for your questions I thought I'd give you an overview of our EXISTING infrastructure first" I say to the Boss and sycophant. "So you have a better idea of what we have and what we do and what to ask."

"So we've got.... nothing?" the sycophant says sarcastically, gesturing around the mostly empty room.

"Not quite nothing," I say, pointing as I step backwards through the door. "There's that large drum. And this nail gun."

BOFH: Oh go on. Strap me to your Hell Desk, PFY