Stripped of its galaxy, this black hole is wandering naked in the cosmos 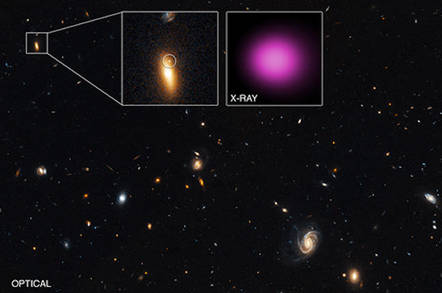 In visible light (left inset) there's not much to see: all the action is in the X-ray (right inset). Image: Chandra

Boffins analysing old Chandra x-ray telescope data have spotted a rarity indeed: an X-ray source that seems to be a black hole, but without a galaxy to surround it.

However, most supermassive black holes are in the centre of galaxies, so Chandra's team suggests the black hole lost its galaxy to a larger one.

The discovery was buried in data collected during a 2000-2002 survey of what's called the “Extended Groth Strip”, using Chandra and XMM-Newton data.

The researchers classify the wanderer as a hyperluminous X-ray source: they spew out between 10,000 and 100,000 times as much X-ray energy as stellar-sized black holes, and are “10 to 100 times more powerful than ultraluminous X-ray sources, or ULXs”, Chandra says.

It's not always that bright, however. In the abstract of their paper for the Astrophysical Journal (the Arxiv pre-print is here), they call it a transient.

The X-ray outburst, the group writes, was “due to tidal disruption of a surrounding star by the black hole.” Its mass was estimated from the peak X-ray luminosity “at around the Eddington limit”. ®