'Adoption is the new measure of success' – who knew? 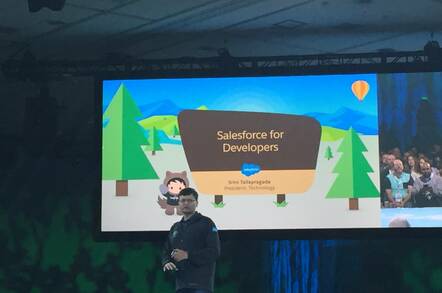 Dreamforce In contrast to most technology conference presentations, the Salesforce developer keynote at Dreamforce '16 on Thursday was delivered in the round – the audience encircled the stage rather than being banished beyond the proscenium arch.

It's a staging choice that fits the goals set forth by the company in June at its first developer conference, TrailheaDX. The company's avowed aim is to create a big tent that can accommodate not just professional software developers, but also those without formal programming experience.

Salesforce calls these people "Trailblazers," in keeping with the exaggerated, cartoonish National Park decor that evokes a budget version of Disneyland. There were 2.8 million of them, the company said in June.

Four months later, there are more than 3 million people developing for the Salesforce platform, said president of technology, Srini Tallapragada. He claimed that Trailblazers represent the "fastest-growing enterprise developer community."

Declaring that "adoption is the new measure of success," Tallapragada said modern apps need to be engaging and are becoming experiences.

It may be hard to imagine that the measure of success for apps was ever anything other than adoption or that apps were ever not experiences. But Tallapragada's observation that "customers need apps faster," makes sense, given that development speed is implied by the name of the company's Lightning development framework.

There weren't a lot of surprises, given that Salesforce previously published details about its Winter '17 release. But attendees seemed pleased that they will be able to access data through the Lightning Data Service without writing Apex code.

Developer evangelist Emily Rose outlined the process of integrating Saleforce's Einstein AI service into Salesforce apps to make them smarter. Using the Dreamhouse real estate sales app that featured prominently at TrailheaDX as an example, Rose demonstrated how Einstein's algorithms could suggest a price drop for a real estate broker based on analysis of a price data set.

The promise of no-code development appears to be somewhat overstated, given the amount of code that showed up on slides displayed during the keynote. That was underscored by the introduction of Salesforce DX. Described as a new developer experience, it means Salesforce developers can now use traditional source-control systems like Git, testing and deployment tools like Selenium, and other standard tools of the trade.

Following the keynote, Chris Eales, chief architect at BrightGen, a Salesforce partner, told The Register that it is possible to use the Salesforce platform without programming experience, though often no-code developers operate as part of a team that includes people with more traditional developer backgrounds.

"The platform has declarative deployment capabilities," said Eales. "You don't need to use Git to get your data. At lot of it depends on whether you're building and developing your own app and releasing it to the world, or perhaps are in a consultancy where you're extending a customer's implementation of Salesforce as to how much dev background you need." ®

Effort to help fund open-source projects proves too much